2. Twitter has claimed for years that they make concerted efforts to detect & thwart gov-backed platform manipulation. Here is Twitter testifying to Congress about its pledge to rapidly identify and shut down all state-backed covert information operations & deceptive propaganda. 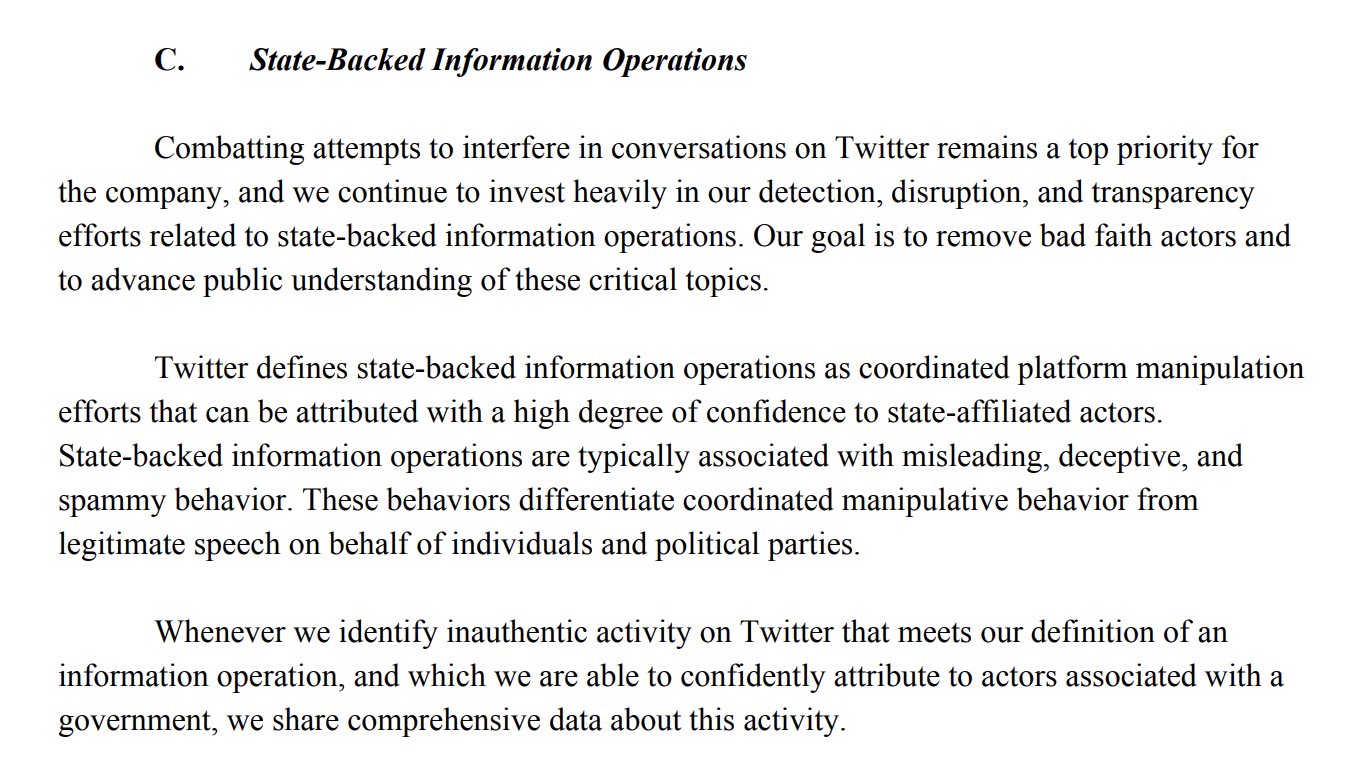 3. But behind the scenes, Twitter gave approval & special protection to the U.S. military’s online psychological influence ops. Despite knowledge that Pentagon propaganda accounts used covert identities, Twitter did not suspend many for around 2 years or more. Some remain active.

4. In 2017, a U.S. Central Command (CENTCOM) official sent Twitter a list of 52 Arab language accounts “we use to amplify certain messages.” The official asked for priority service for six accounts, verification for one & “whitelist” abilities for the others. 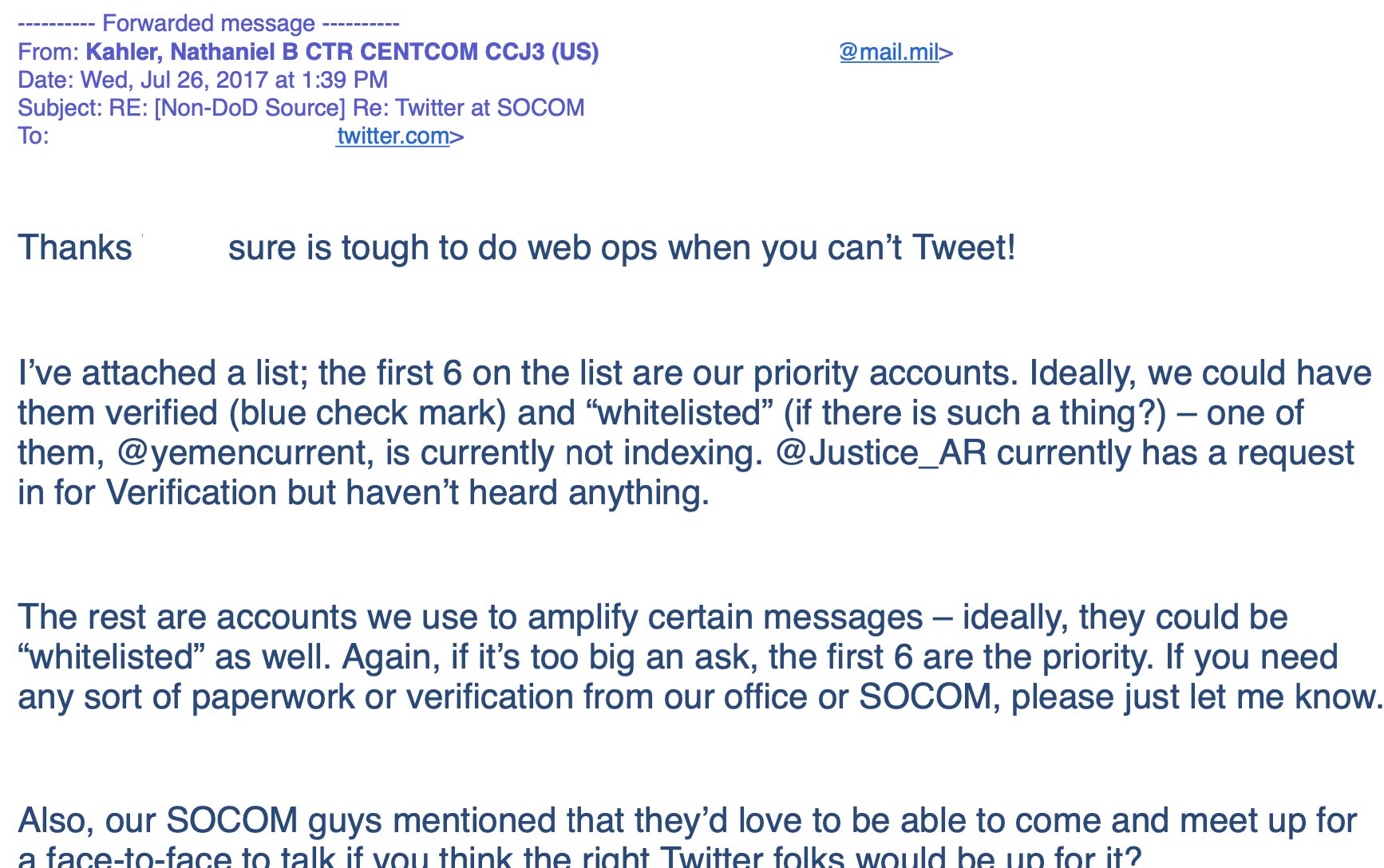 5. The same day CENTCOM sent the list, Twitter officials used a tool to grant a special “whitelist” tag that essentially provides verification status to the accounts w/o the blue check, meaning they are exempt from spam/abuse flags, more visible/likely to trend on hashtags.

6. The CENTCOM accounts on the list tweeted frequently about U.S. military priorities in the Middle East, including promoting anti-Iran messages, promotion of the Saudi Arabia-U.S. backed war in Yemen, and “accurate” U.S. drone strikes that claimed to only hit terrorists. 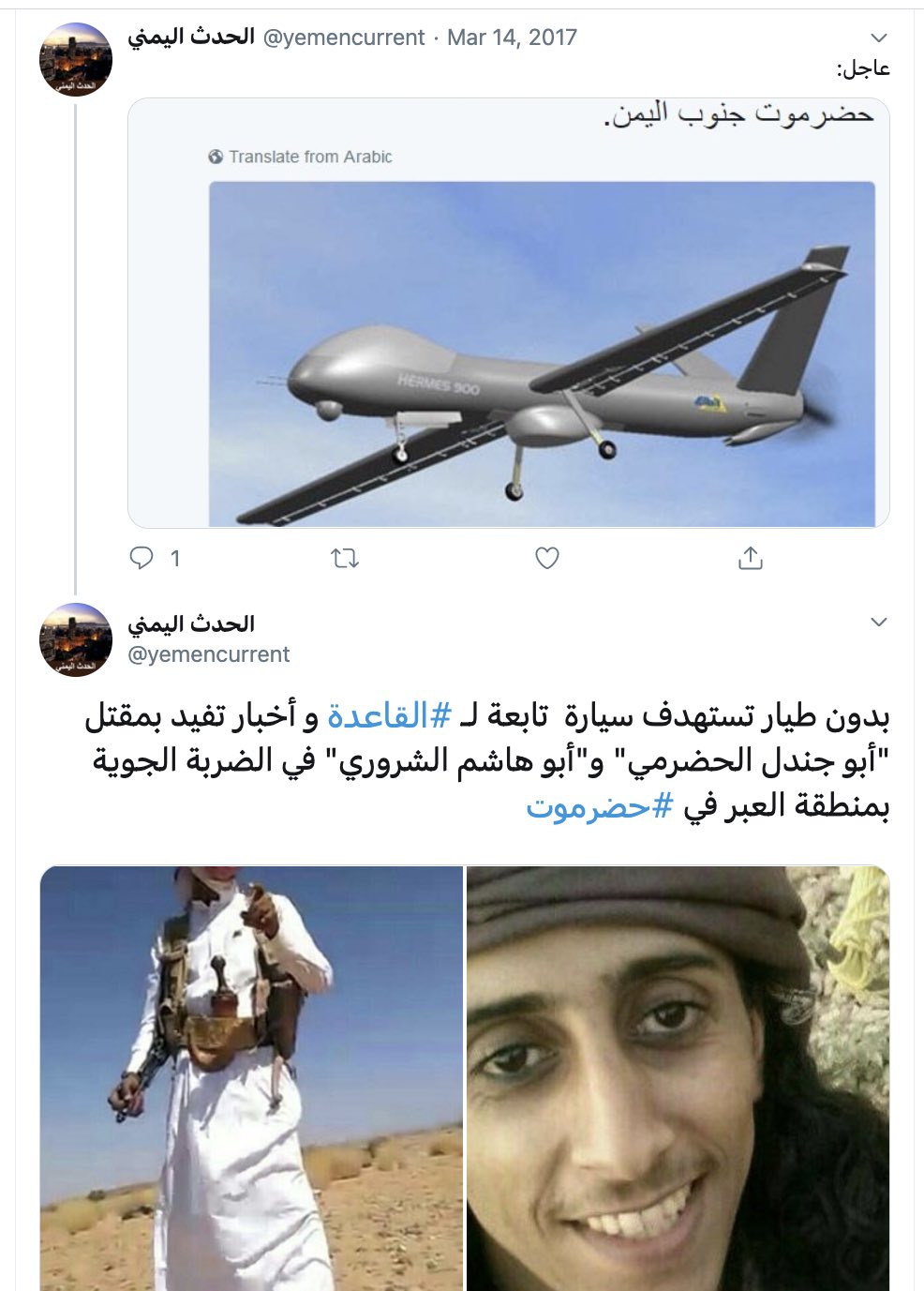 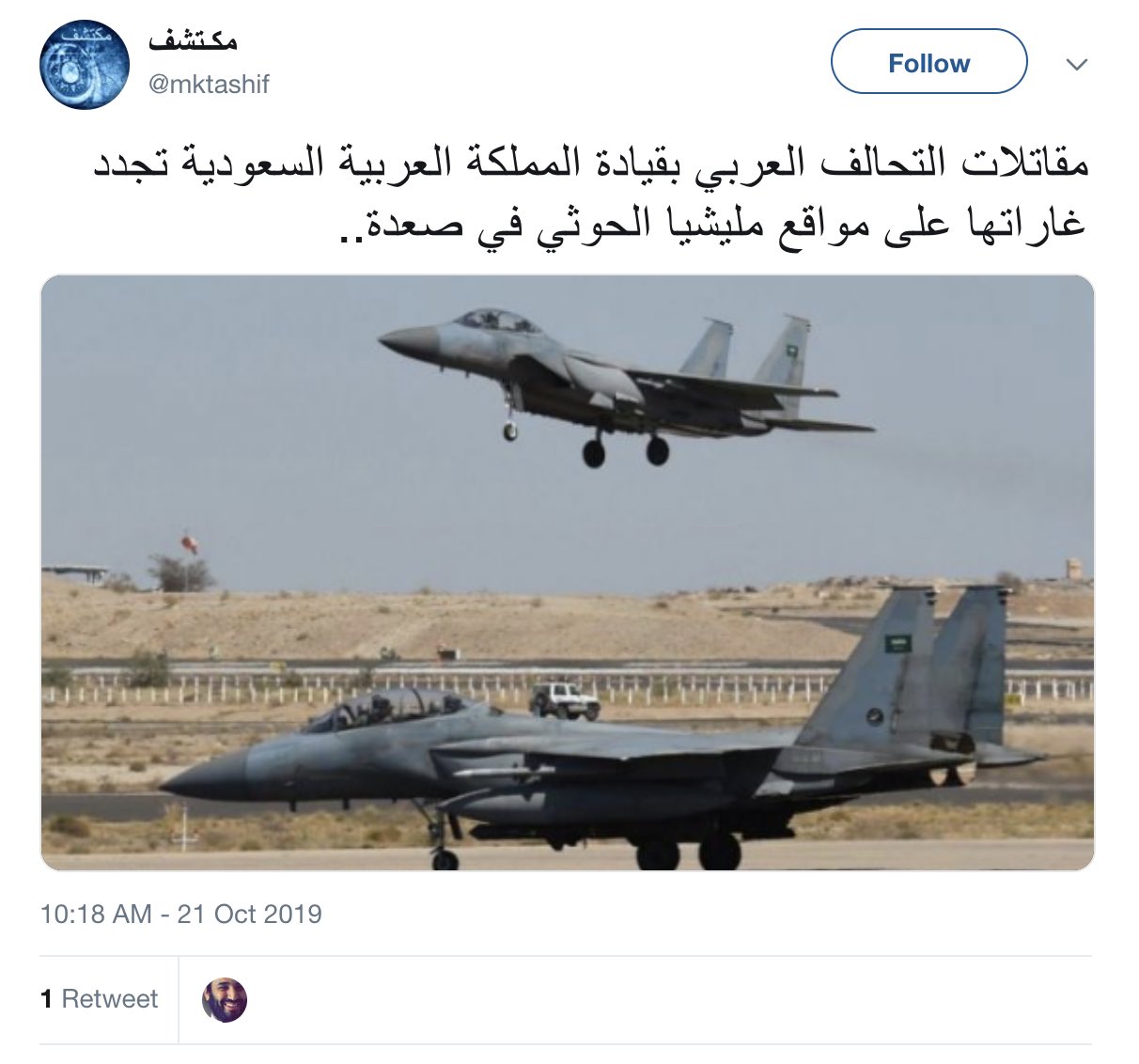 7. CENTCOM then shifted strategies & deleted disclosures of ties to the Twitter accounts. The bios of the accounts changed to seemingly organic profiles. One bio read: “Euphrates pulse.” Another used an apparent deep fake profile pic & claimed to be a source of Iraqi opinion. 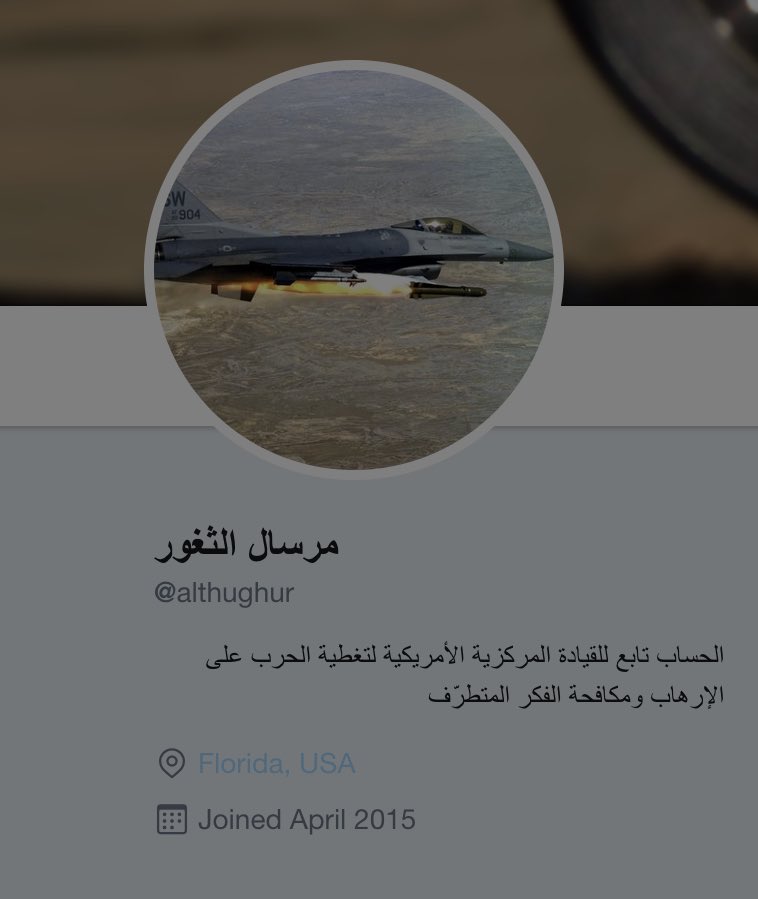 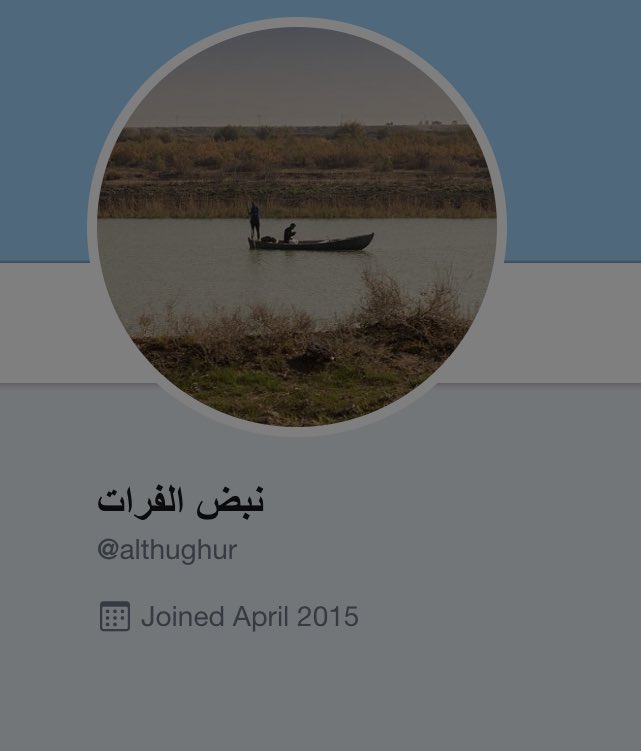 8. One Twitter official who spoke to me said he feels deceived by the covert shift. Still, many emails from throughout 2020 show that high-level Twitter executives were well aware of DoD’s vast network of fake accounts & covert propaganda and did not suspend the accounts.

9. For example, Twitter lawyer Jim Baker mused in a July 2020 email, about an upcoming DoD meeting, that the Pentagon used “poor tradecraft” in setting up its network, and were seeking strategies for not exposing the accounts that are “linked to each other or to DoD or the USG.”

10. Stacia Cardille, another Twitter attorney, replied that the Pentagon wanted a SCIF & may want to retroactively classify its social media activities “to obfuscate their activity in this space, and that this may represent an overclassification to avoid embarrassment.”

11. In several other 2020 emails, high-level Twitter executives/lawyers discussed the covert network and even recirculated the 2017 list from CENTCOM and shared another list of 157 undisclosed Pentagon accounts, again mostly focused on Middle East military issues.

12. In a May 2020 email, Twitter’s Lisa Roman emailed the DoD w/two lists. One list was accounts “previously provided to us” & another list Twitter detected. The accounts tweeted in Russian & Arabic on US military issues in Syria/ISIS & many also did not disclose Pentagon ties. 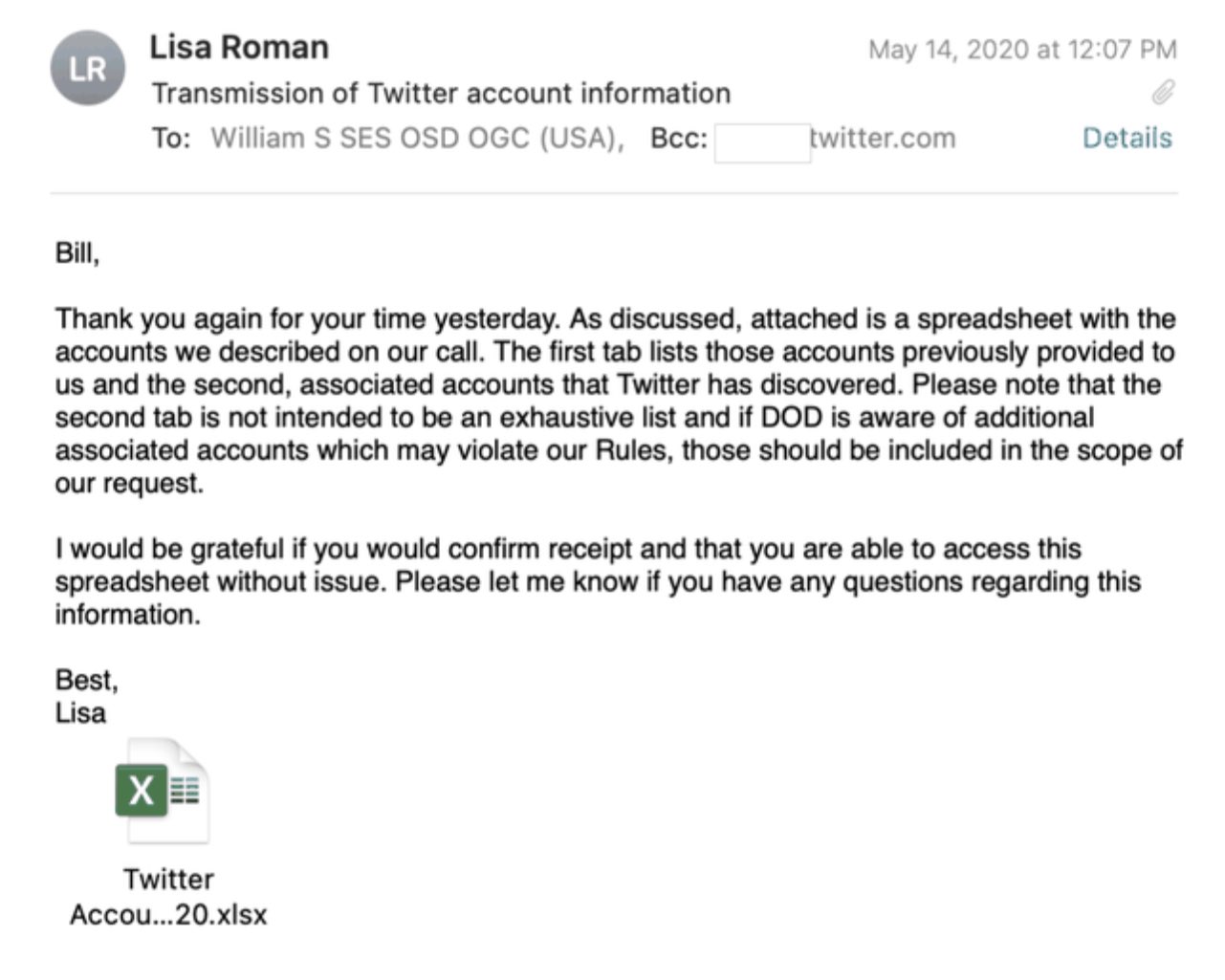 13. Many of these secretive U.S. military propaganda accounts, despite detection by Twitter as late as 2020 (but potentially earlier) continued tweeting through this year, some not suspended until May 2022 or later, according to records I reviewed.

14. In August 2022, a Stanford Internet Observatory report exposed a U.S. military covert propaganda network on Facebook, Telegram, Twitter & other apps using fake news portals and deep fake images and memes against U.S. foreign adversaries. https://public-assets.graphika.com/reports/graphika_stanford_internet_observatory_report_unheard_voice.pdf…82 2,251 8,681
15. The U.S. propaganda network relentlessly pushed narratives against Russia, China, and other foreign countries. They accused Iran of “threatening Iraq’s water security and flooding the country with crystal meth,” and of harvesting the organs of Afghan refugees.
16. The Stanford report did not identify all of the accounts in the network but one they did name was the exact same Twitter account CENTCOM asked for whitelist privileges in its 2017 email. I verified via Twitter’s internal tools. The account used an AI-created deep fake image. 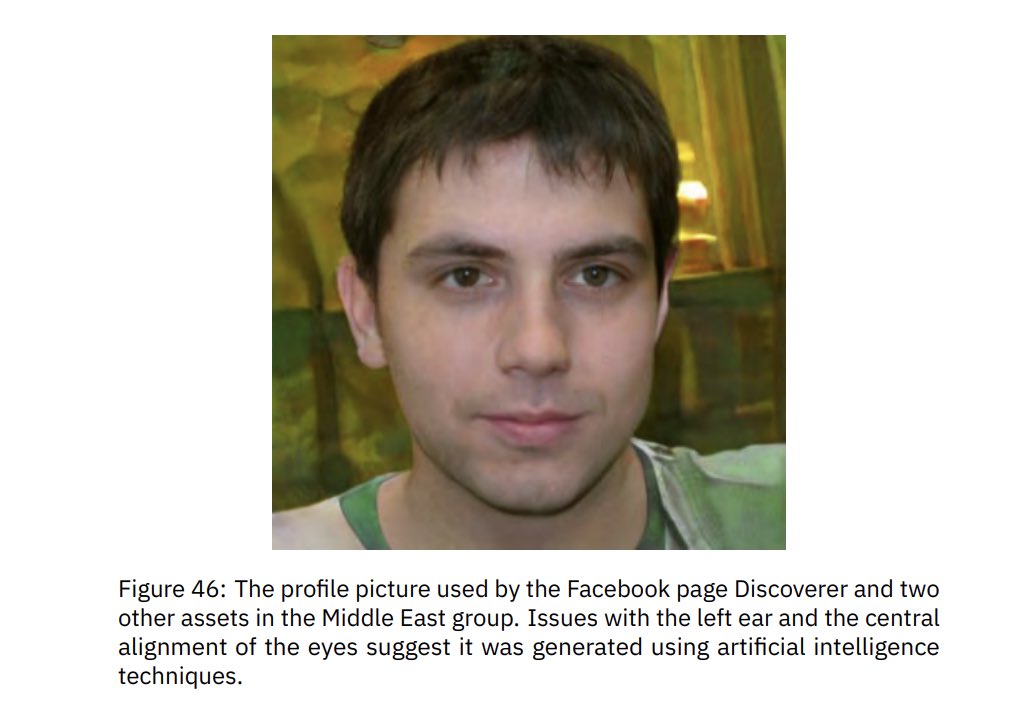 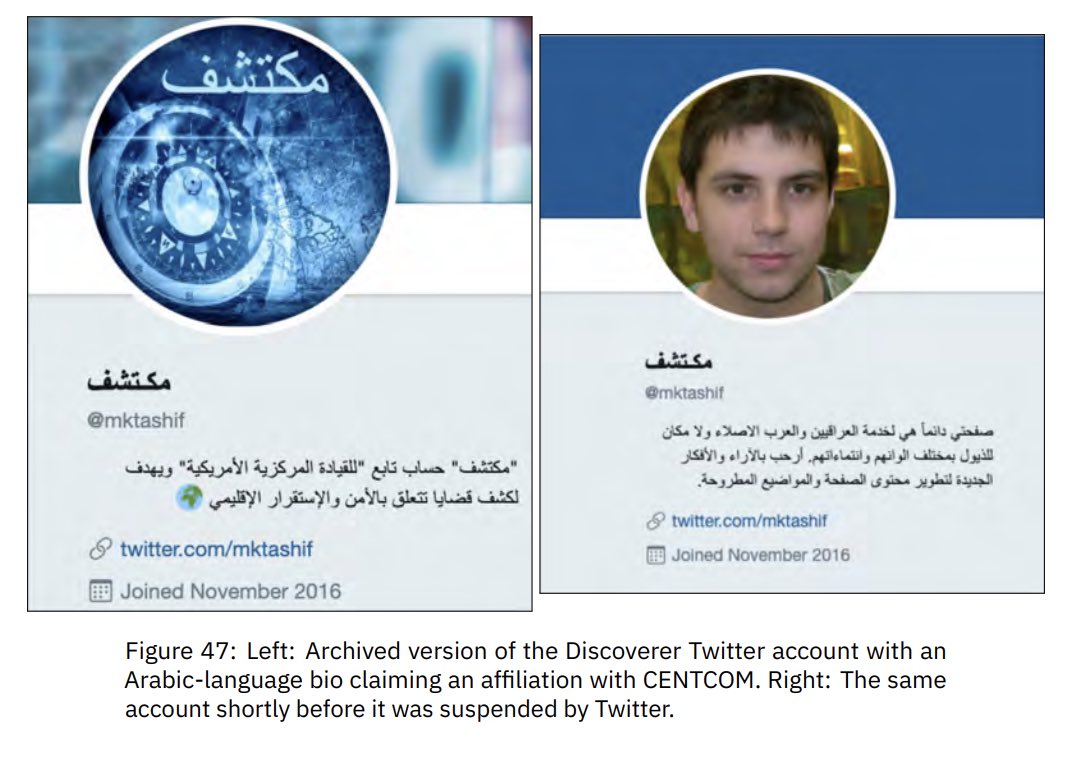 17. In subsequent reporting, Twitter was cast as an unbiased hero for removing “a network of fake user accounts promoting pro-Western policy positions.” Media covering the story described Twitter as evenly applying its policies & proactive in suspending the DoD network.
18. The reality is much more murky. Twitter actively assisted CENTCOM’s network going back to 2017 and as late as 2020 knew these accounts were covert/designed to deceive to manipulate the discourse, a violation of Twitter’s policies & promises. They waited years to suspend.
19. Twitter’s comms team was closely in touch with reporters, working to minimize Twitter’s role. When the WashPost reported on the scandal, Twitter officials congratulated each other because the story didn’t mention any Twitter employees & focused largely on the Pentagon.

20. The conduct with the U.S. military’s covert network stands in stark contrast with how Twitter has boasted about rapidly identifying and taking down covert accounts tied to state-backed influence operations, including Thailand, Russia, Venezuela, and others since 2016.
21. Here is my reported piece w/more detail. I was given access to Twitter for a few days. I signed/agreed to nothing, Twitter had no input into anything I did or wrote. The searches were carried out by a Twitter attorney, so what I saw could be limited.
https://t.co/AgcFy71fE3
Much of the Pentagon’s covert social media ops focused on promoting the war in Yemen. Which American actually voted for this war? Who does it benefit other than Saudi Arabia & it’s local Al Qaeda allies? The war has killed thousands of children & civilians, displaced millions.
Comments:
You Might Like...