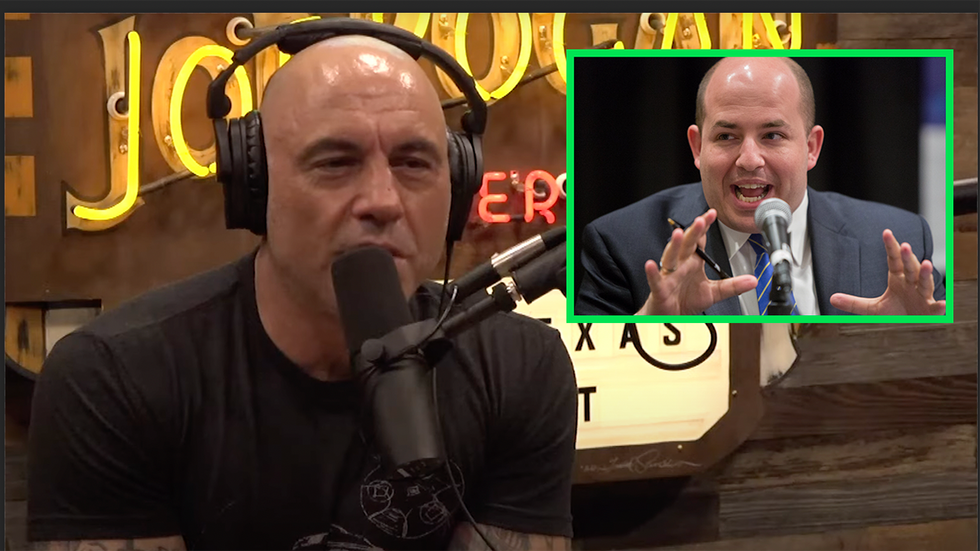 Days like today make me wish Joe Rogan never sold to Spotify. Because there isn’t a clip available right now of him BRUTUALIZING Brian Stelter. All I have is the knowledge that somewhere, all alone, is Stelter reading the headlines and sobbing into a giant cheesecake. He was already eating the cheesecake for breakfast. He’ll probably eat a second one over Rogan making him cry mean girl tears. Then he’ll go on CNN and be an indignant douchelord.

At issue was CNN’s resident genderless potato-head getting his granny panties in a bunch over YouTubers getting higher ratings than CNN does. It was after Joe Rogan said obvious things about cancel culture and white men. The lack of self-awareness it takes for Stelter to not understand needs to be marveled at and studied.

They were describing it as if they’re entitled to viewers. They were saying, “There are people on YouTube right now that get more views than this show.” This is because the market has spoken and your show’s f*cking terrible. Well, Brian Stelter’s show keeps slipping and slipping and slipping in the ratings.

Rogan also hammered Stelter for being a biased partisan hack, evident by the recent tongue bath he gave to press secretary Jen Psaki. “How can we help you help us cover Biden more better than we are?“

But the YouTube thing is why Stelter has been so bitchy over Rogan lately. He doesn’t get it. When you (CNN) suck as bad as you do and make it clear you hate half the country, that half of the country is going to find someone who doesn’t hate them. You can read news to be informed. At issue are opposing viewpoints and people being allowed to discuss opposing viewpoints. The corporate left, which obviously includes CNN, doesn’t want there to be any opposing viewpoints. That’s why the slightest questioning of whatever the left’s narrative is that week is considered “misinformation.” CNN relies on you not believing what you see with your own eyes. It’s hard for them to do when so many eyeballs have access to the internet.

Also, contrary to what blobs like Stelter want you to believe, Joe Rogan is NOT A RIGHT-WINGER. Earlier this week, Rogan was attacking Donald Trump over January 6. You would think Stelter would be having a circle jerk with Jeffrey Toobin over that. But Rogan acknowledges that the right has an opinion and occasionally likes to talk with them about it. Stelter thinks doing so should be regulated and illegal.

I’m sure Stelter is also jealous Rogan is prettier and more popular than he is. He’s nothing if not the Gretchen Wieners of cable news-entertainment.