VIDEO: BLM Protesters Call for Insurrection, ‘Street Justice’ on White People So They ‘Feel The Pain And The Hurt’ 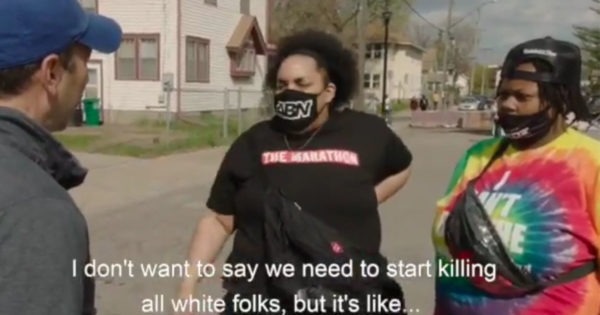 Black Lives Matter and racial justice protesters at the George Floyd Memorial in Minneapolis, Minnesota spoke to journalist Ami Horowitz on Tuesday, the day of the Derek Chauvin trial verdict, to express their desire to see “pain” and “hurt” inflicted on “white folks” via “street justice,” and expressed ignorance about the statistics of police-involved shooting, claiming “thousands” of unarmed black people are killed by police every day in a systemic “genocide” of the “African-American race.”

Horowitz first asked the protesters if believed the city should be burned down, to which they unanimously answered in the affirmative. One female protester explained that burning the city down would make “them see that we’re here” and “continue the movement.”

“How many unarmed black people were killed by cops last year? Any idea?” Horowitz asked two women. “A hundred plus, in just Minnesota?”

“No, around the country,” Horowitz said, to which she replied, “Oh, thousands! Thousands!”

“Seems like you’re trying to erase our like, like destruct the whole race of like, y’know, the African-American race,” her friend added. All of the protesters questioned by Horowitz emphatically agreed that police departments are perpetuating a “genocide” against black people.

I went to the George Floyd memorial in Minneapolis to speak with protesters. pic.twitter.com/G3zBJjAPDo

Multiple protesters also expressed support for a “civil war” if “that’s what it takes” to get “justice.”

One woman added that she believes white supremacist are “most of the country,” and when asked if she would support gathering up white people to do “street justice,’” she exclaimed, “That would be ideal!”

“I don’t want to say we need to start killing all white folks, but it’s like, maybe they need to start feeling the pain and the hurt,” another female protester stated.