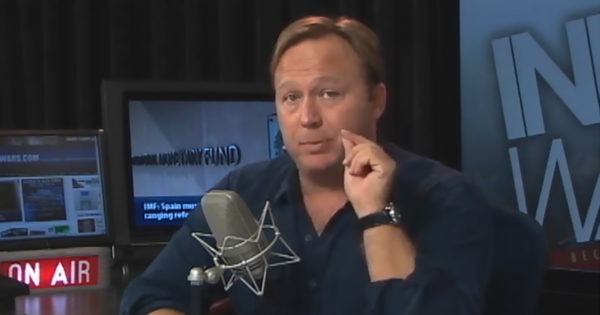 Video of radio and TV show host Alex Jones predicting a pandemic-provoked economic lockdown in 2010 has resurfaced. In the short clip from more than a decade ago, Jones used news reports from contemporary mainstream media outlets and white papers from the Rockefeller Foundation to accurately predict what would happen in the 2020s.

“I’ve had chills since last night. This just confirms everything else we’ve already researched,” said Jones on the radio in 2020. “A Rockefeller study envisions future dictatorship controlled by elite, millions being killed, quarantines, checkpoints, the end of the family, everything that’s in the other documents, but this dovetails with all the other Rockefeller documents.”

“This is just going to continue to intensify until we take our governments back from these eugenics madmen. The question is: Will you have the courage to really do the research yourself?”

In the 10-year-old broadcast, Jones decried the policy papers released by the elites as proof of their plans, but also so dense and numerous that average Americans could never hope to both read and understand them all.

“These people are so arrogant that they write policy papers, so many of them, that they’re producing these policy papers and reports and white papers so fast that you could never read them all,” said Jones. “It is an open conspiracy against you and your family.”

Jones then predicted the exact type of lockdowns faced by Americans a decade later, when the China-originated COVID-19 was used as an excuse to lock down virtually every Western economy and oust numerous populist leaders around the world.

“The only chance we’ve got of beating this scientific dictatorship, this creeping death that takes its time to incrementally enslave you, mentally, psychologically, physically, spiritually, the only way to defeat it is for the rank and file of this planet to realize that you have a choice to make on what your destiny’s gonna be.”

Jones then lambasted the “controlled corporate media” which he said, 10 years ago, was already creating an “artificial stigma” to prepare the world for the elite’s “unveiling of planetary dictatorship.”

“They all talk about how we need a police state to carry this out.” Jones concluded, “Win, lose, or draw, you need to choose a side.”

In other news...
Israeli Leaders Slam, Palestinians Hail ICC Decisio...
Heroes: Deputies rescued residents from burning hom...
Yet another CBS Television Show Concerns about Whit...
Happening In America? Amazon Engages in ‘Digital Bo...
More Than 70 Congressmembers Urge Biden to Withdraw...
Our Culture is Under Attack and Must be Defended
Visit our Discussion Forum at Libertati.com. Follow us: