Glenn Youngkin: Biden Regime is ‘What a Failed Presidency Looks Like,’ ‘Sun is Setting’ on McAuliffe’s Career 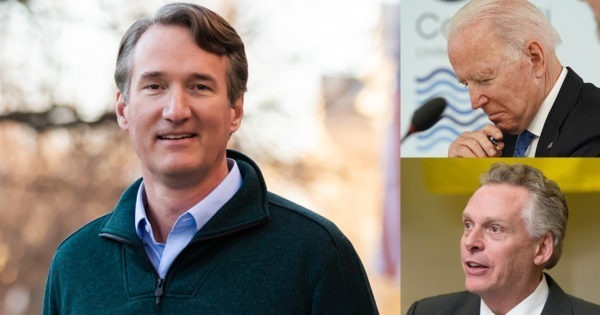 Republican nominee for Governor of Virginia, Glenn Youngkin is blasting the Joe Biden regime and his Democrat opponent Terry McAuliffe ahead of a campaign rally that will feature Biden, just the latest national figure to rush into the Commonwealth in an effort to bail out a struggling Democrat ticket.

“You can’t help but look at President Biden and recognize what a failed presidency looks like,” Youngkin told Fox News during a weekend interview.

In recent days and weeks, McAuliffe has also had to lean on former President Barack Obama and failed Georgia gubernatorial candidate Stacey Abrams, a sign that the “sun is setting” on his political career, according to Youngkin.

How about a game of one-on-one?

In addition to Biden’s upcoming appearance, which is scheduled for this Tuesday in Arlington, Democrats have pulled out all the stops in the Virginia Governor’s race, trotting in national figures and even suspending anti-election fraud measures in deep blue Fairfax County in what some say is an effort to ensure an easy Democrat victory for McAuliffe.

The Biden Regime’s Kamala Harris has also gotten in on the action, releasing a video targeting black parishioners with demands they vote for Terry McAuliffe. A bipartisan chorus of critics says the Harris video violates the Johnson Amendment, which bars political speech and endorsements from the pulpit, and could put the tax-exempt status of churches that play video in jeopardy.

Youngkin says the theatrics from McAuliffe and the left indicate that “the sun is setting on Terry McAuliffe’s 43-year political career, and they’re doing anything they can to try to get the spotlight off the fact that he’s sinking.”

“The sun is clearly setting on @TerryMcAuliffe‘s 43-year political career and we’re all watching it.”

Glenn Youngkin has surged in Virginia ahead of Election Day, with doubts about him earlier expressed by conservative voters seeming to largely fall by the wayside as parental rights and school curriculum have become focal points of the race.

Among other issues driving voters away from the veteran politician who was the focus of national headlines as far back as the Clintopn administration, McAuliffe has campaigned on stripping parents from education decision.

As previously reported by National File, McAuliffe has defended the existence of graphic gay sex scenes published in school libraries, and vowed to lock parents out of the education process, energizing countless concerned parents and citizens against the Democrats’ radical left-wing agenda.

National observers say the off-year election, held in a state that leans Democrat, could act as a barometer of sorts, gauging approval of the Biden Regime and Democrat-dominated government as well as the implementation of critical race theory and other radical curricula in schools, staunchly opposed by Youngkin and fiercely supported by McAuliffe.

In other news...
Russian ‘SolarWinds’ Hackers Launch New Attack On IT Supply Chain, Microsoft Says
Narrative Assassin: ‘LGBTQ Indoctrnation Is Filth And Mark Robinson Did Nothing Wrong’ Sa...
With A Record 79 Container Ships Waiting Off The SoCal Coast, A Scary Supply-Chain Soluti...
Brink of Totalitarianism; Get Out of the Banks, Own Physical Warns “The Creature from Jek...
Why I Hate 'Democracy' | Wilkow | Ep 259
Legal analyst reveals possible civil charges in fatal movie set shooting
0 Comments
Inline Feedbacks
View all comments