Texe Marrs in 2018- Cabalist Agenda is to Enslave Mankind

“The plan of the Jews is to employ the tools of chaos magic –to use deception, lies, craft and magic —to obtain… the conquest of the Gentile world… and the establishment of a [satanic] Kingdom on earth. Thus the world will eventually be “mended” (repaired or restored) and
“made perfect.” Perfect for them, the Jews that is. For Gentiles, unholy hell will have arrived on earth.” (p.26)
This is “the Jewish Utopia.”  Sounds farfetched,  but it explains much of what is happening today.
This article was posted on March 10, 2018. Texe Marrs, a great prophet, died November 23, 2019. Now it’s all coming to pass.
by Henry Makow PhD

In his latest book, Texe Marrs provides a rude reminder of the “big picture” behind world events. The West is already controlled by satanist

Jews whose goal is to establish a technological police state akin to Stalin’s darkest days and to slaughter any Christians or Muslims stubborn enough to adhere to Christ or Mohammed.
This seems farfetched but daily events confirm this analysis. They have used the banking system to subvert and control all social institutions worldwide. They carry out a mass shooting in Florida and no one is questioning the authenticity of this event? Here are the real shooters. yMHpU3vMzuRJCTWK.mp4  Instead, they enlist an army of child fanatics to disarm adults.
Why do they have to disarm the goyim? So the goyim cannot defend themselves from a planned terror such as took place in previous Masonic Jewish revolutions in France and Russia.
They censor free speech on the Internet. They sabotage gender and coerce girls into seeking high-powered careers instead of becoming wives and mothers. By destroying femininity and masculinity (heterosexuality) they are thwarting the fundamental alchemy of reproduction. This upending of nature is at the heart of Satanism. Western society is being inducted into a satanic cult, call it Communism.
They promote migration and miscegenation. There is blanket mass surveillance. We are the target of the most hateful campaign of social engineering but are accused of “hate speech” if we so much as mention it. How more diabolical can you get? The Communist (Satanist) takeover has already occurred. They’re just waiting for the right moment to take off the final wraps.
BLOOD COVENANT WITH DESTINY

In his new book, Texe Marrs reminds us that Judaism is a satanic cult masquerading as a religion. THE WORSHIP OF DEATH Is the aim of Satanism. The goal is the destruction of everything that is wholesome and good. The population has been lulled to sleep by the Jewish-controlled media. They won’t know what hit them.
Marrs says that Zionism is the “most satanic and depraved form of racial supremacism”. He blames Zionism and its ugly twin Communism for 250 million deaths in the last century. He sees a hideous “beast slouching toward Bethlehem” in the form of a merciless Jewish tyranny already on full display in Palestine. Palestine might be the dry run. US police are trained by Israel.
“Humanity has long had a rendezvous with this cruel beast. We cannot escape…his psychopathic and barbaric criminal insanity…He is the epitome of consummated evil..” (14)
“The Jews are on a fast track to their occult fate. They have made an agreement with hell, a covenant with death, and payments on their debt to Satan must be made in accordance with that contractual agreement.” (15)
“The average Christian assumes that the Jews are merely Old Testament believers who simply need Jesus to be “completed.” Judaism is, in reality, a wicked corrupt religion of hatred, deception and of deviant rampant, sexuality and hedonism.” (130)
Marrs shows how throughout history Jews have behaved in a barbaric fashion whenever they held the upper hand. He delves into the Talmud and Kabbalah to show that the real Jewish Covenant is not with God but with the devil. He shows how the Kabbala is an incestuous family soap opera where the participants achieve cosmic balance by screwing each other. Jewish prayer (davening) imitates coitus.
“The ultimate objective of Kabbalah, despite the vain and empty denials of many of its advocates, is the utter destruction of all matter, of mankind itself: Annihilation. The Ouroboros serpent encircling and strangling humanity. Creative destruction, the wicked satanic kabbalists call it….The neocon cabal is a veiled and shadowed demonstration of it. They actually want to plunge the world into nuclear catastrophe and chaos. A fiery chaos and destruction atop of which they hope to build their new, occult utopian Order of the Ages. It is a frightening prospect and so far it has been successful.” (86) 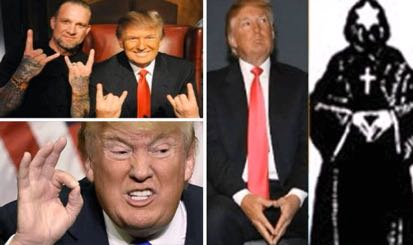 The pieces are being put in place for a nuclear war. Trump has betrayed his campaign promise to defuse tensions with Russia and avoid gratuitous wars in places like Syria. The West is preparing to attack Iran and, if it goes nuclear, Putin has vowed to respond in kind.  Trump’s hand signals remind us that he is a kabbalist Freemason. He distracts Americans with domestic issues. These won’t mean very much when we’re all dead and the country is in smoldering ruins.
CONCLUSION
As an ethnic Jew, I am heartsick that a secret faction of “my people” have gone over to Satan, and the majority are either ignorant or indifferent. The Satanists have put all Jews in jeopardy. Anti-Semitism could burst into violence. Some foresee a civil war.  Jews must disown the satanic agenda or face the consequences if there are any. They must stand with their Gentile neighbors and oppose Communism in all its myriad forms.
But the goyim have also been complicit. I am puzzled at Marrs’ narrow focus on Jews. This statement puzzles me most: “The Jewish majority hates humanity, they despise life, they hate God. Therefore they are psychopaths and love death.” (16) 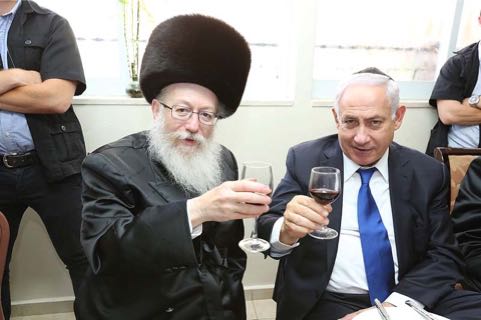 (If you want to hate Jews, hate the ones who are instrumental in the Conspiracy.)
This is true of Jewish leadership and their minions but “the Jewish majority” are dupes who do not feel this way. Like Freemasonry, Judaism is a satanic cult. Only the “initiated” know the real agenda. The rank-and-file are manipulated with high-sounding platitudes.
The Jews I know do not hate humanity and love death. They are oblivious to the dark side of Judaism and prefer assimilation. The rate of intermarriage is almost 60%.They are just as ignorant as the average goyim. Guilt by association is wrong. The real haters are the Chabadniks and their ilk.   (See how Jewish liberals react to this Jewish hate.)
I am puzzled by Texe Marrs’ failure to include Freemasonry. The bankers require the collaboration of goyim who have betrayed their society, religion and culture. What about the US Congress? The McCains and the Lindsey Grahams are not Jews. They are Freemasons who hope “Jews” will take all the blame for America’s downfall.
There is only one reference to Freemasonry in Texe Marrs book. On page 85, he says Freemasonry “a Judaic religious sect, believes that God is both good and evil…”   That’s it?  When the US is run by Freemasons as well as Jews? Why does everyone let the Freemasons off the hook?
Because they “were only obeying orders?” Don’t these cowardly opportunists deserve equal blame?
Freemasons have played as large a part as Jews in the subversion of Western society. They expect to get a seat at the table or at least a few crumbs. But, according to prophesy, both Jews and Gentiles will be destroyed.
I commend Texer Marrs for writing a courageous unwelcome book. We don’t like to be reminded of the diabolical agenda behind daily events.  Western society has been taken over by people who seek its ruin. This is mindboggling. If we realize these people are both Jewish and Gentile, we can overcome the charge that our resistance is bigotry.  The enemy is Satanism. And Satanism takes many forms.
The question remains, what can we do? Prepare.  Armageddon may be closer than we think.
—
Related – Colonel says Israel is Dragging US into WW3
New York Times Exemplifies Jewish Lust for War
David Duke- The Secret Behind Communism

In other news...
Miami Dolphins Lose Again, Have Problems Beyond A Trade For Any QB
BREAKING: AOC’s Secret Comes Out – Law Enforcement Makes Move To…
An Open Letter To The Secretary of Defense And Pentagon Leaders
When Information Is Free & Transparent It Is A Threat To The [DS],The [DS] Poked A Be...
Bengals WR Ja’Marr Chase On Track For Best Rookie Receiver Season In NFL History
Watch: Pizza-delivery guy has meltdown, goes bonkers on driver with Trump flag
0 Comments
Inline Feedbacks
View all comments