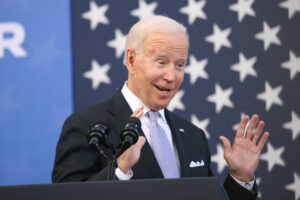 Give President Joe Biden a swear jar and the administration should have no f***ing issue finding funds for his infrastructure bills.

Despite not being known for mean tweets, Biden is still walking around the White House using language that’s as colorful as a Pride flag. Aides at 1600 Penn have been stunned by Biden’s rampant swearing, according to a Politico report.

“Why the f*ck isn’t this happening?”

The report claims that other folks inside the White House have found Biden’s foul language to be “endearing,” giving him the tone of an “everyman” — indistinguishable from blue collar Americans, like the thousands of pipeline workers he laid off in January.

Vice President Kamala Harris is reportedly a big fan of spouting “m*therf*cker,” which is mostly problematic for being a gendered term.

Biden still makes the effort to retain a courtly presence before his aides after a censorship-worthy spree, per one of the White House sources.

“When he cusses around women, it is always, and I mean always, it’s followed by an immediate apology,” mentioned the source.

When pressing his assistants for answers on things like China, supply chain issues, inflation or which channel is airing The Golden Girls re-runs, Biden is known for retorting with “don’t bullsh*t a bullsh*tter.”

The post I (Un)Solemnly Swear: White House Aides Surprised By President Biden’s Behind The Scenes Cursing appeared first on OutKick.

In other news...
NO ONE is “Forcing” YOU to Do Anything!
After Abortion at Planned Parenthood Fails, Mother Decides to Keep Her Baby
Malinowski Reveals Millions of Dollars in Undisclosed Stock Trades
Aaron Rodgers Says Eagles Fans Are The Best Trash Talkers
Do Black Lives Really Matter? It Depends on Who You Ask…
Houston Texans, Miami Dolphins, another team discussing Deshaun Watson, Tua Tagovailoa Tr...
0 Comments
Inline Feedbacks
View all comments