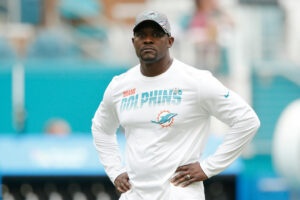 I know because I’ve heard from the different sides in the agenda battle.

We’re making progress toward a trade!

But I know this: No matter what happens in the coming weeks leading to the Nov. 2 NFL trade deadline, there’s already a loser in the whole affair — and it isn’t Watson, who has 22 civil lawsuits and 10 criminal complaints pending against him while he’s not playing for the Houston Texans this season.

The clear losers in all this are the Miami Dolphins’ coach Brian Flores and general manager Chris Grier.

They’ve lost the confidence of the Tua Tagovailoa camp of handlers if not the quarterback himself.

And they’ve lost trust among much of the fan base.

Worse of all, these two men who have lost so much already seem on the verge of their biggest loss of all — a future in their leadership roles.

Here’s how all this is playing out:

We know the Dolphins drafted Tagovailoa with the No. 5 overall pick in 2020. Yes, it seems ages ago now, but that was last year. Tagovailoa is scheduled to make only his 13th start for the Dolphins on Sunday against the Atlanta Falcons.

And despite this short and incomplete resume to his name, Tagovailoa has already been targeted by Grier and Flores, with the blessing of club owner Stephen Ross, for replacement.

Think what you wish about that but the Dolphins have engaged the Houston Texans multiple times about trading for Watson so they’re obviously willing to cast aside Tagovailoa in what they believe would be an upgrade.

The Dolphins have talked to the Texans about Watson as much or more than any other team. They cannot do this and say things like “Tua is our quarterback” and remain credible.

And this is where public trust starts to erode because people have brains and memories.

Even if the Dolphins never end up making a deal for Watson people see Flores and Grier, quick to jettison other players and assistant coaches the last two seasons, as having very little loyalty to anything other than what seems suitable right now.

Right now is the only thing that seems to matter to an organization whose oft-stated mantra is one practice at a time, one game at a time, forget last season, don’t think about next season or next week.

Except that right now the Dolphins have a 1-5 record. They just lost their fifth consecutive game, this one the most embarrassing of all because it came at the hands of the winless and less talented Jacksonville Jaguars.

And the binding to stop this bleeding is to replace Tagovailoa? One of the few players in Sunday’s game who didn’t lay an egg?

Yet, that’s exactly what this looks like. It looks like Miami’s management team is desperate to save their jobs by seriously considering throwing a sort of trade deadline Hail Mary.

Except this is no longer right on any level.

Look, before the draft I was all for trading for Deshaun Watson. But the Dolphins, flush with draft picks then, didn’t do it.

During training camp and the preseason I was all for trading for Deshaun Watson. But the Dolphins, with a hopeful season ahead, didn’t do it.

During both periods the Dolphins talked to the Texans. We know this. It would have made sense to make this move then.

This Dolphins season is on a collision course with a couch — which is where the Dolphins will spend their time during the postseason. Watson is not going to suddenly come in, learn an offense and save the season.

And if you’re thinking Grier and Flores would be making this move for the future, my question is what future?

The one in which they might not be around?

The one in which the bill comes due on Watson for those lawsuits and criminal complaints and the NFL suspends him if he’s not in jail?

Or the one in which Ross, the club owner, continues to trust two men who have crashed the franchise since 2019 and are now hoping one trade saves them from getting fired?

This is a strange approach. And, again, it suggests desperation rather than a plan.

This also suggests desperation: A few weeks ago, someone obviously hoping to help Flores leaked to CBS Sports that the decision to draft Tagovailoa instead of Justin Herbert had nothing to do with the coach.

This feels like someone is in survival mode. And one way to survive is to distance oneself from the worst decision any administration can make during its tenure — blowing the decision on drafting a franchise quarterback.

This also feels like someone had no compunction about uplifting one member of the Miami administration (Flores) while throwing another one (Grier) under the bus.

All this about a decision that, make no mistake, both men agreed to make together.

Fans see all of this and have to wonder who to trust. I no longer trust either one because beyond this whole Watson trade thing, their personnel and coaching record is questionable.

Grier has collected more draft picks than the U.S. Army during World War II. He did this by trading away Pro Bowl players such as Laremy Tunsil and Minkah Fitzpatrick. But he didn’t use those picks wisely and the team is not significantly better so far.

Flores collected Super Bowl rings as a New England Patriots assistant and defensive play caller. But the Dolphins defense, which should be his baby, is nearly as bad now as it was his first season with the team.

And his coaching staff, which is a source of annual turnover, is less experienced and inferior now than it was his first year with the team.

The offensive line is still not fixed. The running back corps lacks talent. The team continues its habit of collecting injury-prone wide receivers that don’t show consistent durability.

And, as they discuss trading for a quarterback, the quarterback situation is not fixed.

Well, nothing. Because the Dolphins improbably made the playoffs that season under Adam Gase. And they haven’t gotten to the postseason under Flores and Grier.

This is a bad look for everyone involved and it is definitely not a good look for Ross, who has owned the team since 2009 and has a losing record as an owner over the past dozen years.

Is he really going to trust Flores and Grier to make another decision on a quarterback?

These guys studied and then traded Ryan Tannehill to Tennessee … and he’s played better than any Miami quarterback has since.

These guys gave up a second-round and fifth-round pick for Josh Rosen … and mocked me during a press conference when challenged that it was a bad move. It was, they eventually understood, a bad move.

These guys picked Tagovailoa over Herbert which means they passed on the offensive rookie of the year and quarterback who is now a rival to Patrick Mahomes in the AFC West.

Grier passed on Lamar Jackson in 2018. He told Ross to fire him but he was picking Fitzpatrick no matter what.

And talk about jettisoning players — Grier then traded Fitzpatrick one year later because Flores wouldn’t abide playing him in his natural safety position.

Ross must be aware of all these things. He would be blind not to see it all.

And he’s going to allow these decision-makers to make another important and long-lasting decision on his franchise’s quarterback?

If there is a resurrection, then Flores and Grier deserve to keep their jobs and make more decisions, including on Watson. If the team more predictably flounders, both Flores and Grier have to go.

And then the new general manager and head coach — hopefully better at their jobs — can make a decision on Watson, which perhaps will come with more information about the legal side of the matter.

That probably makes too much sense. So the Dolphins may not do this.

The post Brian Flores And Chris Grier Have Lost A Lot — Including Right To Make A Decision On Watson Trade appeared first on OutKick.

Click this link for the original source of this article.
Author: Armando Salguero