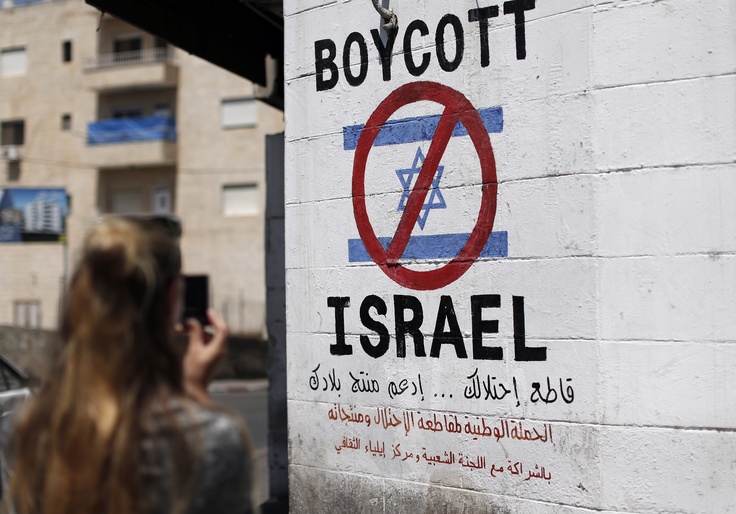 A coalition of longtime anti-Israel activists and groups is spearheading a “grassroots” campaign by Google and Amazon employees calling on the companies to cut business ties with Israel, drawing accusations that it’s an astroturf operation.

On Oct. 12, a group of “anonymous Google and Amazon employees” published an open letter in the Guardian calling on their employers to pull out of a project with the Israeli government to develop a cloud data system—called Project Nimbus—and “cut all ties with the Israeli military.” The authors said they were withholding their identities “because we fear retaliation” and claimed “more than 90 workers at Google and more than 300 at Amazon” had signed on to the letter.

The next day, a group calling itself No Tech for Apartheid launched a website. The group claimed it was created in response to the employee letter, saying it was “heeding the call from hundreds of Google and Amazon workers to rise up against” Project Nimbus, and linking to the Guardian article.

The group registered the website—NoTechForApartheid.com—nearly two months prior to the Google and Amazon letter’s publication, and it sat dormant until the day after the “anonymous” letter was published, according to domain respiration data. The fine print at the bottom of the website notes that it is a “joint project” of Jewish Voice for Peace and MPower Change, two prominent anti-Israel groups that are active in the Boycott, Divestment, and Sanctions movement.

While the No Tech for Apartheid campaign bills itself as an organic effort, the two anti-Israel groups—Jewish Voice for Peace and MPower—leading the project have no significant ties to the tech industry but lengthy backgrounds supporting boycotts, divestment, and sanctions against Israel. MPower’s leadership role in particular could become a credibility problem for the campaign due to its controversial executive director. The group is run by Linda Sarsour, a prominent BDS activist who was kicked off the Women’s March board and denounced by President Joe Biden due to her affiliation with anti-Semitic preacher Louis Farrakhan. Sarsour, who has claimed that Israel is “built on the idea that Jews are supreme to everyone else,” spoke at a 2015 rally organized by Farrakhan, who has called Jews “termites” and “satanic.” Last year, Biden issued a statement saying he “condemns [Sarsour’s] views and opposes BDS” after Sarsour participated in a conference call for his supporters.

“MPower Change has been caught up in numerous controversies, including advertising events under the slogan, ‘Open to all, minus cops and Zionists,'” said Joseph Cohen, executive director of the Israel Advocacy Movement.

“It is particularly concerning that this organization was co-founded by Linda Sarsour,” Cohen said. “An activist with a history of anti-Semitism and extremist views, including repeatedly expressing support for convicted terrorist, Rasmea Odeh.”

No Tech for Apartheid did not respond to a request for comment.

Israel advocates said the timeline of the campaign and the group’s formation as well as the involvement of the two anti-Israel groups raise questions about the grassroots origins of the campaign.

“I don’t believe for a second this is a grassroots effort,” said Emily Schrader, a columnist for the Jerusalem Post who has examined the campaign. “JVP and MPower intentionally misled the public on this campaign to appear as if there’s a great deal of debate over Israel. There isn’t.”

“Generally, it’s not a problem that these organizations worked together for a common cause or that they collaborated on a petition, but to purposely obfuscate who is behind the campaign, and to intentionally misrepresent it as grassroots is reprehensible and goes to show how dishonest they are in the first place,” said Schrader.

The three public faces of the campaign—Google employees Gabriel Schubiner and Ariel Koren, and Amazon employee Bathool Syed—also have long histories of anti-Israel activism. Koren and Schubiner are organizers with Jewish Diaspora in Tech, a group that has a history of calling for Google to boycott Israel. Jewish Diaspora in Tech is a partner on the No Tech for Apartheid project, according to the website.

Bathool Syed has also been involved in BDS activism for years, according to her Twitter feed, which she made private earlier this week. “I don’t get why Zionists always plead for dialogue but literally walk out on dialogue. Typical hypocrisy #UCDavisDivest,” she wrote in a Jan. 29, 2015, post advocating for the University of California Davis to divest from Israel.

“The letter claims to represent hundreds of workers, yet only three people can be verified,” said Cohen. “Everyone else is anonymous, making it impossible to verify if they even exist.”

“This obviously raises serious questions about the genesis of this campaign and the involvement of these BDS groups,” he added.