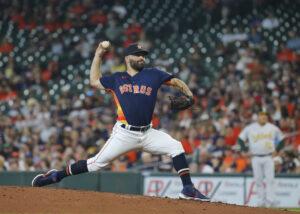 All odds in this article come from our partner, FanDuel Sportsbook, where new users can win $150 on just a $2 bet by picking any NBA team to win 10/19-10/20. Click here to claim this offer now.

We took an absolute drubbing in baseball yesterday. We now return to the ALCS for Game 3 and a series tied at one game apiece. The series shifts to Boston, let’s see how we can bet tonight’s game.

For the Astros, they need to win this series without their best pitcher, Lance McCullers Jr. Tonight, they have Jose Urquidy starting the game. Urquidy has a 3.86 ERA on the road, but a stellar 6-0 record in 12 night starts with just a 2.89 ERA. He faced the Red Sox once this season and allowed just one earned run over six innings. That game took place when he was a home starter. This will be Urquidy’s first appearance in 15 days though. Will there be rust, or will he be able to quickly step into the rotation and manage the pressure of a playoff game.

The Red Sox are sending Eduardo Rodriguez to the mound, a man that has really struggled in Fenway Park. He is a 5.95 home ERA pitcher, the small side of optimism is that he is about a run-and-a-half better at night than his home ERA suggests. Against Houston, he has been absolutely rocked this season. He had two starts that covered 9.1 innings. In those starts, he allowed 12 earned runs. The two starts were nearly identical with him going 4.2 innings in both and allowing six earned runs in both. A bright spot for the Red Sox is that Rodriguez held the Rays to just two earned runs in his home start against them over five innings.

I don’t like either of these pitchers, but Rodriguez’s home struggles, and struggles against the Astros really needs to be considered. I’m going to play the Astros to win at -102. Urquidy is not a strikeout pitcher, he averages less than one per inning, but he did have nine strikeouts against the Red Sox in the game he started against them. Tonight, if he can get to five innings, I think he can get four strikeouts. At +108, I’ll play the over on his strikeout total of 3.5 and take a shot.

In other news...
Arizona: Bet on the Phoenix Suns for Easy Money
ITALY – SOME COPS ARE ON THE RIGHT SIDE OF HISTORY
Police Release Photos/Video of Jew-Hater Who Set Jewish School On Fire
Demonic Activity In The End Times — The Final Seven-Year End, The First 3 1/2 Years of T...
This Abandoned Cruise Ship Is About To Run Aground And Its Cargo Is Simply Ghoulish!
Meghan McCain joins Hannity for first TV interview since leaving 'The View'
0 Comments
Inline Feedbacks
View all comments