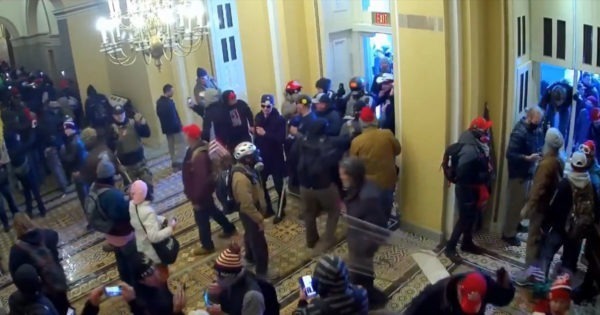 Capitol surveillance footage from the January 6 election integrity protests has been publicly released after a judge ruled against the attempts of Biden regime prosecutors to hide the footage from public view.

US District Chief Judge Beryl Howell has ruled that “the government shall promptly make the video evidence submitted to the Court on August 16, 2021, in connection with defendant’s plea hearing held August 19, 2021, publicly available without restrictions by providing access using the “drop box” technical solution described in D.D.C. Standing Order No. 21-28.”

“The government’s reasons for preventing disclosure of the video exhibits, and thereby sealing them, are insufficient to overcome the public right of access to the five CCV videos at issue,” Howell wrote, noting that “The public has an interest in understanding the conduct underlying the charges in these cases, as well as the government’s prosecutorial decision-making both in bringing criminal charges and resolving these charges by entering into plea agreements with defendants.”

DOJ released a new set of Capitol surveillance videos from Jan. 6 after a judge ordered them to do so, rejecting the government’s argument that making the clips public presented a security risk. On that fight, and what the videos show: https://t.co/IwJekF6hSX pic.twitter.com/aoIuDvuW8u

“Moreover, the government has already released video from inside the Capitol in other cases and even more videos taken by individuals inside the Capitol on January 6 have been made publicly available,” the judge continued. “See Pet’rs’ Reply at 8, 10–11 & n.4. The government does not explain how the information it seeks to protect could not already be obtained by, for example, reviewing already-public videos taken inside the Capitol, and the government does not articulate a particular threat stemming from the release of these particular videos. As petitioners persuasively argue, the asserted security risk is undercut by the already extensive release of CCV footage from the Capitol.”

Multiple surveillance videos have already been released per the judge’s ruling, crushing the hopes of prosecutors to hide the footage from the public.