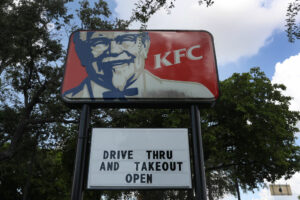 Step aside, in-person learning. Move over, dignity. Back of the line, movie theaters. COVID has found a new subject to bully, and he’s a Colonel. Thanks to another strict and unnecessary COVID-induced lockdown, New Zealand police are treating Kentucky Fried Chicken as contraband. A pair of men were arrested near the Auckland border and jailed, in part because they had a car full of KFC.

After attempting to elude police, two men were arrested trying to sneak a car full of goodies into Auckland, New Zealand amid the country’s strict lockdown that prohibits take out food and open restaurants. The country is on a “level 4 lockdown,” which essentially means residents can’t move from their house, let alone enjoy a little crispy chicken and biscuits.

Aside from a weekend’s worth of KFC, the New Zealand pair had around $100,000 in cash and “empty ounce bags” in their vehicle. Per a report from The Guardian, “officers noticed a suspicious looking vehicle traveling on a gravel road, and upon seeing the police car, the vehicle did a U-turn and sped off trying to evade police. The vehicle was searched and police located the cash, alongside empty ounce bags and a large amount of takeaways.”

Photos of the “crime scene” show that the country’s asinine lockdown forced the rule breakers to try and smuggle in more than just chicken. Multiple containers of coleslaw and fries accompanied the chicken on their joyride to Auckland.

Those found guilty of violating New Zealand’s lockdown laws face six months in jail or a fine of up to $4,000. A small price to pay for a date with Colonel Sanders.

The post New Zealand Lockdowns Are The Dystopian Future Dems Want: Men Arrested For Bringing KFC Into A City appeared first on OutKick.