Can Kentucky Still Cause Problems In The SEC East? We’ll Find Out Soon. 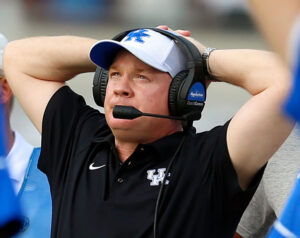 As the final seconds ticked off the clock in Lexington on Saturday, fans breathed a sigh of relief, knowing the team just escaped an embarrassing loss. If you ask Mark Stoops, his Wildcats are lucky to be 3-0 right now, especially with the turnovers and lack of running game.

As Stoops wrapped up the weekend, he reminded folks that it’s a long season and games like Saturday will happen.

The problem is that we’ve seen games like this from Kentucky before, and with the talent they have on the roster, there is no reason that Chris Rodriguez, the Cats’ leading rusher, should have only 46 yards. If he were nursing some kind of injury, then the lackluster performance might be understandable. But Stoops made it clear on Monday that wasn’t the case. They were just trying to work on the passing game.

“There was nothing about taking it easy on Chris (Rodriguez). It was simply working on us and throwing the ball. When we were in our quick game and spreading them out, we were 9 of 10.”

According to FanDuel.com, Kentucky is a 5.5 point favorite over South Carolina this weekend.

If that’s the case, then the game against South Carolina better be worth the extra passes from Will Levis. This is one of those “should win” type of games for Kentucky, as the Gamecocks are coming off a beating from Georgia and look undermanned. But as we’ve seen in the past, Kentucky could easily be in a fight, come the 4th quarter.

This will be the first road game for Kentucky this season and the first time they will play in front of more than 30,000 since 2019. Stoops says he looks forward to the challenging game on Saturday.

“Looking forward to playing South Carolina. It’s always a fun game, very challenging, definitely a great environment down there on the road. They’re doing a very good job, Coach (Shane) Beamer with the change. You can see the energy and the excitement down there. They’re playing very good football, and we’re looking forward to the challenge of going down there and playing them, trying to get another SEC East victory. It’s a big game for us.”

Stoops also discussed preparing his team for a road game. He says he has “to make these guys aware of it. Because we do have two classes and a significant amount of guys that haven’t been in this environment, and we are going to address it. I’m not going to overdo it, but they have to understand”.

If we’re going to take Kentucky seriously this year in the SEC East, these are the types of games they must win. Sorry, we can’t sugarcoat this one. This South Carolina team will be good one day, but that shouldn’t be on Saturday. We keep hearing about how this Wildcat team is going to take the next step, and this weekend is the perfect opportunity to do it.

I know the fan base doesn’t want to look ahead, but should the Wildcats take care of business in Columbia, they’ll be coming home for one of the biggest games in recent memory. The Florida Gators are heading to Lexington next week, and it will sure be a monumental game if Kentucky is 4-0.

The post Can Kentucky Still Cause Problems In The SEC East? We’ll Find Out Soon. appeared first on OutKick.

Click this link for the original source of this article.
Author: Trey Wallace

In other news...
Artist who was 'canceled' by NFL over vaccination choice speaks about new form of 'segreg...
Cawthorn: We will make "King" Biden and Democrats pay | The Chris Salcedo Show
The Beast Will Start to React to Christian’s and Conservatives Websites and Viewpoints, B...
ProFootballDoc: Top 5 Actionable Injury Issues for NFL Week 2
Obama pulling the strings? Fmr. defense secretary apparently had knowledge of Milley’s ca...
Second Amendment:  Massive, Dangerous Foreign Invasion by Illegal Aliens
0 Comments
Inline Feedbacks
View all comments