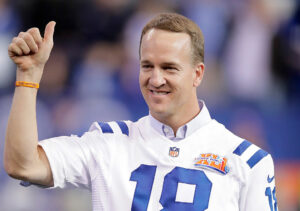 The Denver Broncos remain a team that might just have a price tag attached to it – and one ex-player that is watching closely is former Broncos QB Peyton Manning.

Jason La Canfora of CBS Sports reports Sunday that Manning is watching closely as things progress in Denver to see if it’s worth it to even make an offer.

Right now Denver is not for sale, and there’s no timetable to try and sell the team, though there are some early numbers that the franchise could go for some $4 billion IF it goes on the market.

Manning is super competitive, and there’s no question that he would be a part of the chats to purchase the Broncos should they become available.

Let’s face it, the Hall of Fame QB would be a significant asset to any ownership group, to say nothing of him hoisting a Lombardi Trophy as the Broncos quarterback in the final moments of his playing career.

The post Peyton Manning Keeping An Eye On If Broncos Are Going Up For Sale appeared first on OutKick.

Click this link for the original source of this article.
Author: Matt Loede