Let’s Check In With Australia & Its Endless COVID Lockdowns…Yep, Cases Are Up Big Time 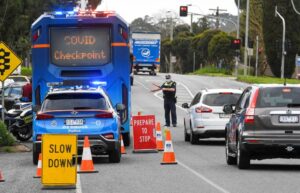 On November 5, 2020, the Washington Post declared that Australia had nearly eliminated COVID “by putting faith in science” and the country had “become a pandemic success story.” According to the latest COVID data, Australia’s case count has risen 19,511% since the Post heaped such praise on a country that has since gone into multiple lockdowns and has left its citizens stranded overseas.

So how exactly did Australia win the war on the ‘VID before it eventually flared up again this summer? Citizens had to give up civil liberties.

“Perhaps most important, though, leaders from across the ideological spectrum persuaded Australians to take the pandemic seriously early on and prepared them to give up civil liberties they had never lost before, even during two world wars,” the Post wrote.

Fast-forward to September 2021. The civil liberties were given up, tens of thousands of citizens stuck abroad can’t get back into their country, and parts of Australia where COVID is low to non-existent, are now refusing to open borders within the country to other Australian states.

Well I checked on Australia again to see if the endless lockdowns & police enforced beach mask wearing had brought cases back down yet, but nope, not yet

We’re up to a 19,511% increase since the Washington Post said they’d “almost eliminated” COVID with faith in science

With its Zero COVID plan admittedly unachievable, Australia now says it will vaccinate the country out of the COVID era — which we know is futile as Israel is finding. But with 31.4% of the population vaccinated and a vaccination number of 80% being thrown around before restrictions will be lifted, citizens will continue to deal with things like helicopters flying around making sure people are complying with government orders.

Every day I see choppers flying over my area at least 3-4 times (its supposedly LGA of concern). Post code based biased thing’s gonna continue I guess

The government knows it cannot possibly keep this lockdown charade going, which was noted in August by Australian Prime Minister Scott Morrison. “This is not a sustainable way to live in this country,” Morrison said.

He’s talking about the restrictions that have turned Australia into a North Korea as far as citizens’ ability to move freely. People have to beg the government to jump on flights which are rare. Citizens need special exemptions to travel internationally. Now there’s talk of using facial recognition domestically to track people and make sure they’re complying with COVID rules.

Of course, the facial recognition stuff is in a *trial run* — wink, wink.

Anti-lockdown protests have been banned. The military has been sent out to make sure people are complying. There are COVID checkpoints. Dissenters are arrested. Masks are mandated outside.

And Australia is supposed to be a democracy.

“Enduring rules of that sort would certainly render a country a police state. In year two of the pandemic, with COVID-19 now thought to be endemic, rather than a temporary emergency the nation could avoid, how much time must pass before we must regard Australia as illiberal and unfree?” The Atlantic wrote September 2.

Just how bad are things for Australians stuck in a never-ending loop of lockdowns and restrictions? Just this week, a 64-year-old man, who had escaped from an Australian jail in 1992 and had been on the run ever since, walked into a Sydney police station and turned himself in.

Why? His work in Sydney as a laborer and handyman had dried up to the point where going back to prison meant no more nights sleeping on the beach. “Stuff it, I’ll go back to prison where there’s a roof over my head,” Darko Desic told Australian media outlets.

While Australia has been able to keep its death toll to four out of every 100,000 Australians, one has to wonder what will happen to a country that believes citizens must give up even more freedoms in order to win the battle against COVID.

Is the government in the mood to give back liberties and control now that they have it? Sit back and watch how this plays out. You make the call.

Australia has almost eliminated the coronavirus — by putting faith in science https://t.co/1qTIIdZzZw

The post Let’s Check In With Australia & Its Endless COVID Lockdowns…Yep, Cases Are Up Big Time appeared first on OutKick.