Is a Crisis Worse Than COVID Coming Next? Potential Generated Crises on the Horizon 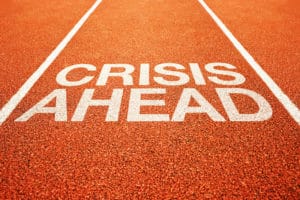 Is a generated crisis worse than COVID coming next? As the COVID scamdemic wanes, here are some possibilities to be aware of.

Is there another generated crisis

just around the corner as the COVID scamdemic wanes in its ability to keep people afraid and acquiescent? Most probably, yes. The New World Order (NWO) runs on its basic Hegelian dialectic formula of problem-reaction-solution. That is its basic fuel. To advance its aims, it requires problems or crises that fear and shock people – thus taking them out of a normal, rational and balanced state of mind and into an emotional and reactive fight-flight-freeze state of mind. That way, it engenders weakness in the target population in the form of poor judgement, poor decision making and enhanced acquiescence. The push to mass-vaccinate the entire world has been unsuccessful, with many people refusing to take the jab. There is good reason for this, since the vaccine is a dangerous experimental device, and is, legally and medically speaking, not a real vaccine but rather a gene-altering chemical pathogen device. While the COVID non-vaccine is wreaking havoc with people’s reproductive systems, making people magnetic and either injuring or killing quite a few people along the way, it is likely the NWO controllers are already actively planning to roll out their next generated crisis or false flag operation. Here are 4 possible scenarios that could be played out.

One generated crisis could be, as NWO frontman Bill Gates boasted in 2020, a “Pandemic II” where another fictional virus (or an alleged SARS-CoV-2 variant) is foisted on the public, though this time supposedly more virulent. This scenario will be just as fake as the current COVID scenario. SARS-CoV-2 has never been isolated or conclusively proven to exist, so logically any ‘variant’ would also be a theoretical creation and not an actual real-world virus. The NWO controllers are actually already trying this in nations like the UK with the ‘Indian variant’ and the ‘Delta variant.’ Another possibility is that the NWO criminals let the current scamdemic fizzle out, then a year or 2 later launch a brand new one following a similar script.

Another generated crisis could be a Climate Lockdown or some sort of lockdown pitched on the idea that we must all work together to stop an impending climate emergency. This could involve banning red meat, banning people from using gasoline-powered machines or vehicles, and banning air travel. It would involve restricting energy use in general (a very technocratic idea, since technocracy is based on a small group of technicians controlling the energy supply of society). For the average person, the lockdowns were devastating, while for the NWO psychopaths, lockdowns worked very well indeed. From their perspective, why not continue them using a different excuse?

The manmade global warming/climate change agenda is a massive unscientific hoax pushed by the very same people that own the oil, gas and coal companies. The similarities between the manmade climate change scam and the COVID scam are many. Both are hyped threats which play upon your emotion (fear, care, etc.). They create a fake emergency to trick you in supporting centralization of power. The key feature of the climate change agenda is to convince you that the carbon dioxide (CO2) produced by humanity is ruining the planet (this is in spite of the obvious biological fact the CO2 is a gas of life). So humanity itself is the villain. The key feature of Operation Coronavirus is to convince you that some alleged tiny invisible virus is going to kill everyone. The human body produces exosomes which are indistinguishable from viruses. Thus the human-produced exosome/virus is the enemy (and thus humanity is the villain, again). It is clear that whatever force is orchestrating all this is pushing forth a clear anti-human agenda.

The most concrete example of a pending generated crisis is surely the WEF’s (World Economic Forum’s) Cyber Polygon, another tabletop exercise and simulation scheduled for July 9th 2021. By now, the WEF and its Bond-villain-esque head Klaus Schwab have become notorious for the aggressive way in which they are positioning themselves to be the administrators of the New World Order, or as they have rebranded it, the Great Reset. However, as James Corbett notes in his recent video on the topic, the WEF is bidding to be the management middleman on behalf of the bloodline families; the WEF is not the source of real power. That being said, it is interesting just how involved they are; remember their graph/chart depicting the interconnectedness of virtually NWO agenda? Have you seen their list of partners which constitute a who’s who of the international corporatocracy?

Early on in the COVID scamdemic, former Google head Eric Schmidt was propagating the word disruption as a key buzzword. Cyber Polygon is also all about disruption. They are planning for a takedown of the internet and the power grid, a crisis which could even include worldwide disruption of supply lines and transportation, a shutdown of global commerce and major food and energy shortages. On its website, the WEF describes the simulation as a “technical exercise” where “participants will hone their practical skills in mitigating a targeted supply chain attack on a corporate ecosystem in real time.” This comes on the heels of two recent suspicious hack attacks where pipelines and meat suppliers were attacked (and the mainstream media blamed it without evidence on Russian hackers). Many readers will know at this point that the WEF (along with the Bill and Melinda Gates Foundation) was involved in the infamous pandemic simulation called Event 201 just a few months before the COVID crisis took off. The WEF is even calling this exercise a cyber “pandemic.” WEF Managing Director Jeremy Jurgens said:

“I believe that there will be another crisis. It will be more significant … it will be faster than what we’ve seen with COVID. The exponential growth rate will climb, will be much steeper. The impact will be greater, and as a result the economic and social implications will be even more significant.”

“We all know, but still pay insufficient attention to, the frightening scenario of a comprehensive cyber attack could bring a complete halt to the power supply, transportation, hospital services, our society as a whole. The COVID-19 crisis would be seen in this respect as a small disturbance in comparison to a major cyberattack. To use the COVID-19 crisis as a timely opportunity to reflect on the lessons the cybersecurity community can draw and improve our preparedness for a potential cyber-pandemic.”

It is crucial to mention at this point that much of the world’s cyber security is run out of Israel, a planned headquarters of the NWO. All roads seem to lead to Israel (Rothschild-ville) these days. Agencies and units inside Israel like the Mossad, Unit 8200 and Talpiot programs control world cyber security. Brendon O’Connell has done great research on this theme.

Just like the COVID scamdemic had many objectives (including the permanent ousting of small brick-and-mortar stores), so too will some Cyber Polygon-type scenario that “goes live” such as shutting down small online sites. The ultimate NWO scheme in this area is to create a whole new version of the internet where you must present ID in order to gain access, thus transforming the right to information and the right to use the net as a public utility into a privilege where you must get permission to gain access.

Lastly, another generated crisis which has been whispered about for decades, and now much more openly than ever, is the fake alien invasion scenario or fake second coming of Christ scenario, which are referred to as Operation Bluebeam. This would involve a brilliant technological display in the skies to mimic UFOs, ETs or religious figures descending from the clouds. The idea is to unite people behind a One World Military or a One World Religion, which have always been planned components of the dictatorial NWO One World Government. UFOs are going more mainstream but there is something fishy about it – looks like they are setting the public up for a limited hangout with controlled opposition figures and groups like Luis Elizondo and TTSA (To The Stars Academy). See this analysis for some of the background.

At this point, recall what Carol Rosin said she was told told by Wernher von Braun, Nazi scientist brought into NASA under Operation Paperclip:

So in other words von Braun said the order of invented enemies and concocted threats would go like this:

He certainly seems to have been accurate so far. The Russians continue to be blamed for all of America’s domestic woes like voter fraud and hacking. The War on Terror was successfully launched after the 9/11 false flag op. Third world nations have been consistently attacked and invaded by the US military for a long time. We are yet to see the asteroid threat emerge, so perahps it is premature to speculate about the fake alien invasion just yet.

If the NWO manipulators were bold enough to actually put this plan into motion, there would be no turning back. The sheer chaos and mayhem that would be created by pretending we were being invaded by hostile aliens would completely transform society and people’s perceptions – irreversibly. Operation Bluebeam would be the last-ditch effort by the manipulators to remain in power and advance their negative agenda. Some people say it’s unlikely and that “they would never do that” however it’s always good to mentally prepare for these things, because you will respond much better if it does occur.

While the COVID scamdemic is winding down in many US states, with people becoming fed up of a never-ending emergency with illogical rules, there could be another generated crisis right around the corner. We have to stay vigilant in the face of a sneaky and stealthy ruling class that is constantly planning to exploit our ignorance and our fear to further its agenda. Be mentally prepared for possible shenanigans and fakery; be physically prepared for supply chain disruptions with supplies such as food, water, gasoline, batteries and other survival items. Do whatever it takes to be better equipped to stand in your power when the next generated crisis hits.

Makia Freeman is the editor of alternative media / independent news site The Freedom Articles, author of the book Cancer: The Lies, the Truth and the Solutions and senior researcher at ToolsForFreedom.com. Makia is on Steemit and LBRY.

The post Is a Crisis Worse Than COVID Coming Next? Potential Generated Crises on the Horizon appeared first on The Freedom Articles.

Click this link for the original source of this article.
Author: Makia Freeman

This content is courtesy of, and owned and copyrighted by, http://thefreedomarticles.com and its author. This content is made available by use of the public RSS feed offered by the host site and is used for educational purposes only. If you are the author or represent the host site and would like this content removed now and in the future, please contact USSANews.com using the email address in the Contact page found in the website menu.