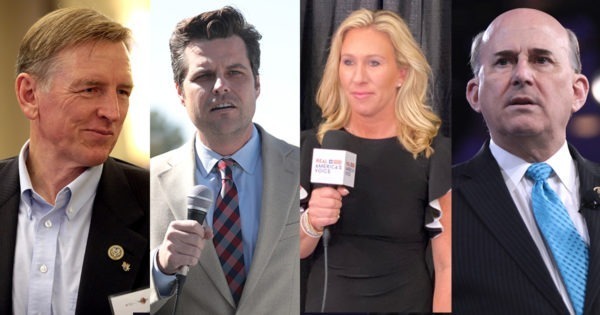 National File has obtained a copy of the letter sent by Rep. Paul Gosar (R-AZ), and signed by Reps. Louie Gohmert, Matt Gaetz, and Marjorie Taylor Green, to Biden administration Attorney General Merrick Garland demanding the release of 14,000 hours of footage from January 6 that the Department of Justice has in its posession, and demanding answers on the horrific conditions in which the detainees are being held.

The letter asks for a meeting in Garland’s office on Tuesday, July 27 “to discuss the status of the January 6th prisoners and related investigations” and notes that “many letters inquiring into their status from Members of Congress have gone unanswered.” Gosar notes that 535 people have been arrested at the time the letter was sent, and 7 months later the public has few answers.

“The undersigned offices in one form or another have been requesting the release of all 14,000 hours of raw footage from surveillance cameras. This is a matter of extreme public importance,” notes Gosar, before adding that “Several defendants have already made plea agreements, yet it does not appear that either they, or their counsel, have had access to this potentially exculpatory evidence.”

Many videos captured on January 6 show Capitol Hill police allowing protesters into the building, and even sanctioning their behavior so long as it remained peaceful. It seems logical to many that the 14,000 hours of surveillance video held by the Department of Justice may prove this incontrovertibly. “Every American citizen has a constitutional right to all the evidence before making any decision to go to trial,” Gosar notes, yet adds, “In our oversight capacity over the DOJ, we have asked multiple times for information only to have our inquiries ignored.”

Then, Gosar turns to the reports that January 6 detainees are being held in horrific conditions, leading many to compare their status to political prisoners. “We have concerns about the reports of the conditions of the prison where these detainees are being held and whether, in fact, there have been instances of abuse inflicted by other prisoners or guards,” Gosar declares. He adds that the undersigned have more “questions regarding whether some have been or are currently being imprisoned in solitary confinement for the purpose of punishment or as a means of cruel and unusual punishment.”

Among other concerns are that prisoners being beaten by prison guards, as was recently reported to Amnesty International by attorney Joseph McBride. “Mr. McBride has also stated, on the record, that dozens of those currently held for January 6th matters have been held in solitary confinement 23 hours a day.”

The letter then notes that Gosar, Gohmert, Gaetz, and Greene have attempted to seek answers regarding the January 6 prisoners repeatedly since at least February 23 to no avail.