BREAKING; Trump Says ‘I Never Admitted Defeat’ In 2020 Election, ‘I Have Not Conceded’ 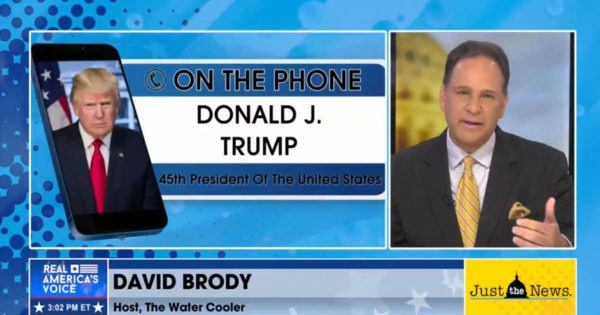 President Donald Trump stated during an appearance on Real America’s Voice that he “never admitted defeat” in the 2020 presidential election, and that he has not “conceded.” Trump added that he believes “there are a lot of things happening right now.”

“No, I never admitted defeat, we have a lot of things happening right now,” Trump insisted to host David Brody. “I think that that was an election that was – I don’t think, all you have to do is read the newspapers and see what’s coming out now. No, I, the word is concede, I have not conceded.”

BREAKING: President Donald Trump tells @dbrodyreports: “I never admitted defeat…I have not conceded.” Watch the rest of the interview on #TheWaterCooler today on #RealAmVoice @Justthenews pic.twitter.com/gknI9FDQH4

On whether or not he would consider running for the position of Speaker of the House – a position currently held by Democrat Nancy Pelosi (D-CA) – in 2022, Trump said, ‘Well I’ve heard the talk, and it’s getting more and more, but I don’t uh, it’s not something that I would have uh, but it is certainly – there’s lot of talk about it. I have a good relationship with Kevin [McCarthy] and uh hopefully we will do everything traditionally, but uh, the uh, the election was a horrible, horrible thing for our country. The whole world is watching.”

Trump did not mention the name of Ashli Babbit, the female Trump supporter who was gunned down by Capitol police on Jan. 6, and did not talk about the hundreds of political detainees currently held in solitary confinement conditions in Washington, D.C. He did issue a vague message to supporters to “stay tuned.”