VIDEO: Tucker Slams GOP For Tone-Deaf Ad That Claims Biden Is ‘Too Nice To Russia’ 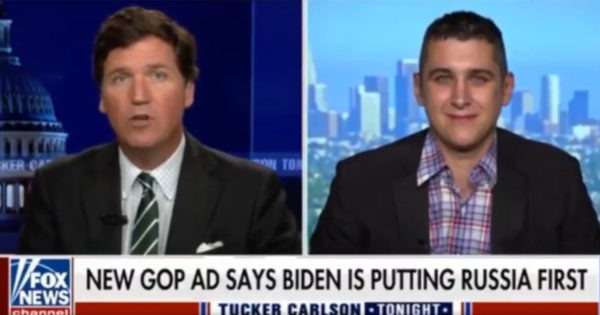 Fox News host Tucker Carlson has slammed the Republican Party for a bizarre ad that claimed Democrat Joe Biden is actually too nice to Russia and should have imposed more sanctions on the country. The ad actually attacks Biden from the left, and insinuates that Republicans would do a better job of antagonizing Russia with the U.S. national security state.

“The Democrat Party has spent the last four years in a McCarthyite froth over Russia, they told us that Russia, not China, was the real threat to the United States,” Carlson said. “Well that was absurd of course, it was absurd then, it’s absurd now, maybe even more so.”

Carlson continued, “The funny part is that over at the Republican National Committee, they believed it. How do we know? This is a real ad released by the RNC. Watch.” The host then played the ad, in which a narrator in a stereotypical Russian accent implies that Joe Biden should have imposed more sanctions on Russia, and that the U.S. should take some sort of military action in response to Russian interests in Crimea.

I was on Tucker tonight talking about the Republicans and their love of NATO, trying to start wars in Eastern Europe, and their support for spreading identity politics abroad. pic.twitter.com/Xc8sPhGPBi

Earlier this week, Biden lashed out at a CNN reporter who insinuated that he was not aggressive enough towards Russian president Vladimir Putin:

President Joe Biden lost his patience with CNN reporter Kaitlan Collins on Wednesday after the latter insinuated that he was overly confident in his ability to change the behavior of Russian president Vladimir Putin. Biden asked Collins “What the hell? What do you do all the time?” and told her “if you didn’t understand that, you’re in the wrong business.”

“Why are you you so confident [Putin] is going to change his behavior, Mr. President,” Collins demanded.

Biden swung around and glared at the reporter. “I’m not confident I’m going to change his behavior,” he snapped. “What the hell? What do you do all the time? When did I say I was confident? I said, I said, what I said was, let’s get it straight, I said what will change their behavior is the [unintelligible] world reacts to to their behavior that diminishes their standing. I’m not confident of anything, I’m just stating the facts.”

In other news...
Man’s Best Friend Steps in and Helps Save ENTIRE Fa...
The Left is Coming After the Texas Alamo
Wuhan lab had 'all the genes' to make an 'epidemic'...
City council changes rule that would’ve denied full...
Courage Is Contagious: Watch This 9-Year-Old Minnes...
Rep. Lance Gooden on border crisis: 'We have been o...
0 Comments
Inline Feedbacks
View all comments