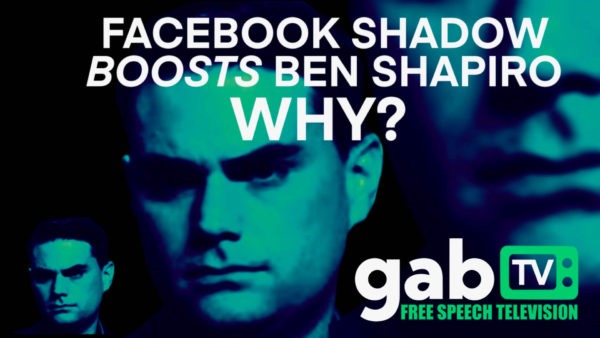 In a video posted to the free speech video sharing platform Gab TV this week, Gab CEO Andrew Torba laid out the case for why many experts believe neoconservative political commentator Ben Shapiro is “controlled opposition,” or receiving promotion from left-wing Big Tech companies because the policies he advocates for are reportedly in alignment with oligarchical interests.

“Let me tell you why Ben Shapiro is controlled opposition, and why you’re being duped: he’s really there – and he’s designed to be there – as a distraction, and as a talking head of the establishment elite,” Torba noted, noting that Shapiro is “not speaking truth to power” and is one of the few anti-abortion talking heads that has not been deplatformed from Big Tech.

“So the fact that Ben Shapiro gets a pass on [abortion issues] should be red flag number one,” Torba continued. “Red flag number two should be the fact that Ben Shapiro, on a daily basis, appears in the top-performing posts on Facebook . . . what’s happening is Facebook is artificially boosting Ben Shapiro and other establishment-approved talking into Facebook news feeds of people who do not engage with their content and do not follow their pages.

Torba noted that reports of Shapiro being shadowed-boosted have been confirmed by media outlets across the political spectrum, including Buzzfeed and National File. As of June 15, links to Shapiro’s posts comprised 8 of the top 10 best-performing post across Facebook.

“You really have to ask yourself, ‘Why is that?’” Torba said. “Why is it that they are not experiencing censorship like the rest of us are, but also they’re being artificially inflated by Big Tech. So while Big Tech is silencing those of us who are actually speaking truth to power . . . [Big Tech is] artificially boosting the conservative fodder, as I like to call it, that are basically bread-and-circus for conservative Christians.”

In other news...
Keir Starmer Argues that Checks in Northern Ireland...
Live: Democratic Caucus leaders speak to press
Patriots Have The [DS] Panicking, Ready For The Off...
Liberals get away with everything
100% Vaccination is More Important Than Your Indivi...
HASTA LA VISTA RECALL! Cal RNC Scams Cal Republican...
0 Comments
Inline Feedbacks
View all comments