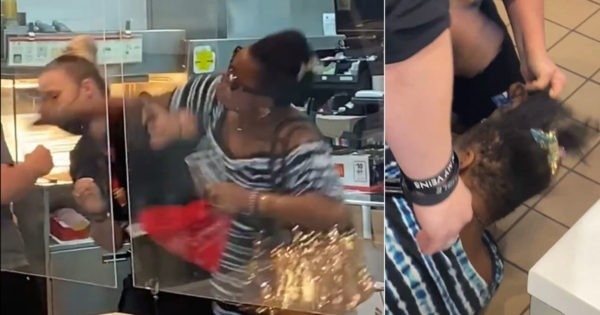 Video footage from Ravenna, Ohio shows an angry BIPOC woman berating and attacking McDonald’s employees, as well as vandalizing other parts of the store, because she was upset that employees would not mix a slushie into three different flavors for her. After several minutes of sucker punching female employees and trashing merchandise, the woman was finally taken down by a McDonald’s worker and punched several times in the face before police arrived.

In the video, Cherysse Cleveland, 44, can be seen storming behind the counter in a vain attempt to mix her own slushie flavors, while screaming “Get the f**k out!” One employee cries out, “Don’t touch me!”

Frustrated that she is unable to reach the slushie machine, Cleveland then sucker punches the McDonald’s manager. When told “Get off me,” she screams “You get the f**k off, bitch!” Even after being struck, the manager attempts to reason with Cleveland, who appears on the verge of tears after being unable to claim her mixed slushie. Cleveland attacks employees several more times, and begins pounding on the counter and throwing store property to the floor.

As the tantrum escalates, Cleveland is told by the employees that she could go “to prison.” She proudly proclaims “Okay, then I’ll f**kin’ go to prison. I’ll f**kin’ go to prison. What the f**k ever.” She then goes and fixes herself a soda from the drink fountain before going behind the counter and sucker punching one of the employees multiple times. Having apparently had enough after nearly three minutes of this nonsense, the employee takes Cleveland to the ground and punches her multiple times, yelling, “You hit my face! Don’t f**king hit me bitch! Don’t f**king hit me bitch!”

Even after police arrived on the scene, Cleveland continued lunging towards and striking McDonald’s staff. She was eventually arrested on two separate assault charges.

In other news...
GOP Scuttles Investigation Into Democrats’ Ukraine ...
Herschel Is Running!!!!
Nancy Pelosi: “I’m a Big Supporter” of Killing Babi...
CRT Infiltrating The Ranks, A Latina Veteran’s View
UNANIMOUS: A WIN for Religious Liberty in Latest SC...
Joe Biden To Reporters In Geneva: ‘They Gave Me A L...
0 Comments
Inline Feedbacks
View all comments