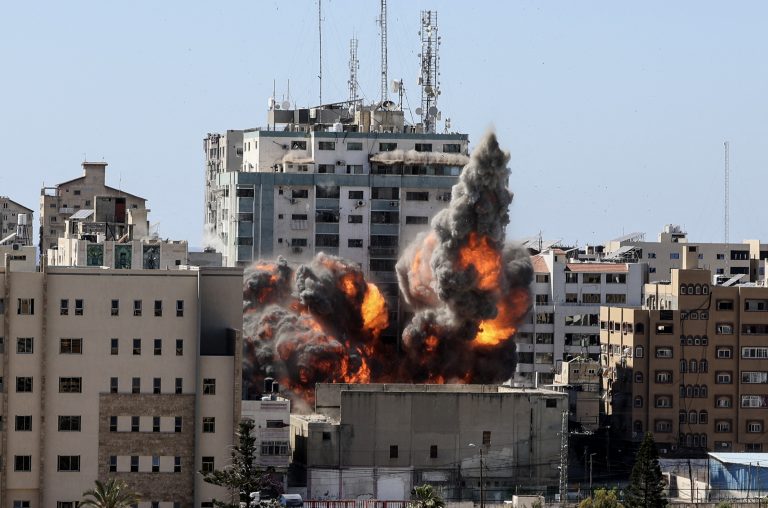 In the wake of an IDF attack on Hamas militants housed in an office building shared with the Associated Press, the wire service issued an outraged response suggesting news outlets were in fact the Israelis’ real target.

“We are shocked and horrified that the Israeli military would target and destroy the building housing the AP’s bureau and other news organizations in Gaza,” AP president and CEO Gary Pruitt said in a statement that did not acknowledge the fact that Hamas militants were operating out of the same building.

“We received a warning [from Israel] that the building would be hit,” Pruitt added, noting that “we narrowly avoided a terrible loss of life.”

Reporters amplified the AP’s tendentious analysis, the latest illustration of the anti-Israel bias and solipsistic tendencies of the news media. Along with the AP, the Qatari-funded Al Jazeera allegedly worked out of the same building, which doubled as a Hamas outpost.

Hamas, the terrorist organization that governs the Gaza Strip, has a track record of firing rockets into Israel from schools and mosques. Journalists at the AP and Al Jazeera are the latest human shields the organization has used to complicate Israel’s ability to respond to terrorist attacks.

Reporters routinely omitted from their analyses Hamas’s presence in the building.

“AP says they got a warning from Israel their office would be obliterated,” wrote the Intercept’s Ryan Grim, calling it an “unconscionable act of terror.”

Laila Al-Arian, an executive producer for Al Jazeera, tweeted footage of the building’s collapse, writing, “If you are a journalist who is silent about this, never talk about press freedom again.” Journalists, including Wall Street Journal White House reporter Sabrina Siddiqui, uncritically retweeted Al-Arian.

Others, like 60 Minutes correspondent Wesley Lowery, argued that the Israeli strike was retaliation against the AP for not reporting the IDF’s claim that it had invaded Gaza. “Yesterday: the AP is one of the only outlets that doesn’t uncritically report Israeli military spin/misinformation. Today: the AP’s office in Gaza is destroyed by an Israeli air strike,” Lowery said without evidence.

Israel’s strike on the Hamas outpost followed reports that Israel told reporters on the record that it had invaded Gaza. “IDF air and ground troops are currently attacking in the Gaza Strip,” the official Israel Defense Forces account tweeted on Thursday.

Israel, however, had not invaded Gaza. While an IDF spokesman blamed the fog of war for the false report, many outlets in Israel viewed the claim as a ruse to lure Hamas fighters into tunnels, where approximately 160 Israeli jets struck.

The AP and Al Jazeera did not respond to a request for comment about whether they were aware they shared office space with a terrorist organization.