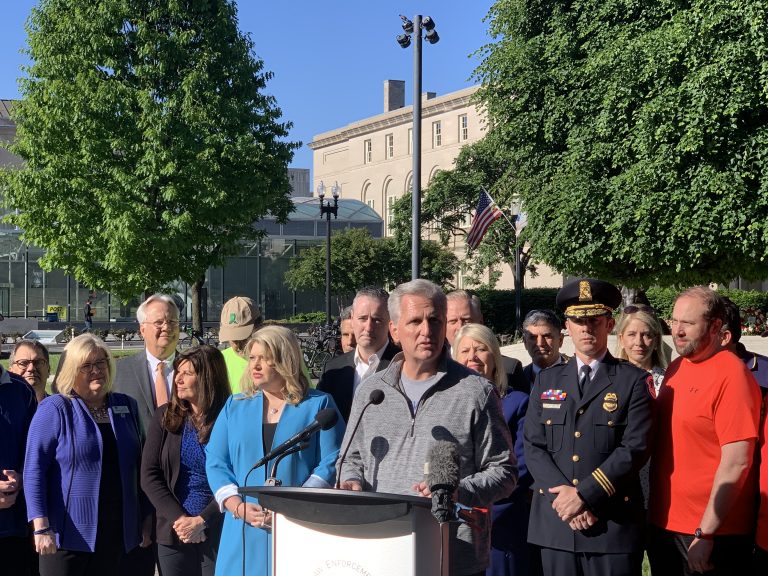 “Now more than ever, Congress must show our gratitude for the sacrifice and service of our fallen heroes,” McCarthy said. “We should not talk about the defunding of the police. We should talk about providing what they need to protect us.”

McCarthy addressed a small crowd gathered at the National Law Enforcement Officers Memorial in Washington, D.C., Thursday morning. He delivered the remarks shortly after arriving with a group of Capitol Police officers on a bike ride through the city to mark National Police Week. He said supporters of defunding the police are politicizing public safety and pledged to push back at efforts to cut police budgets.

“We know the issue before us, and we are ready and willing to act to support law enforcement, not just today but every day, and just as we have in the past,” McCarthy said.

McCarthy told the Washington Free Beacon that law enforcement policy is not just a local issue, but carries national implications. He blamed Democrats in Congress for fanning the flames of defunding the police while stifling bipartisan attempts at criminal justice reform.

“National Police Week is an important time to honor the service and sacrifices of our men and women in uniform. Typically, the majority in Congress makes it a priority by inducing legislation that supports our law enforcement officers,” McCarthy said. “This majority, however, decided to ignore it for obvious reasons.”

Calls to “defund the police” have encountered resistance from policing advocates who point to rising crime rates in cities across the country. Oakland lawmakers announced plans to cut its annual police budget in half, but now face a more than 300 percent increase in homicides while firearm violence has doubled. Other cities including Austin, Minneapolis, and New York City have encountered similar spikes in crime in the face of efforts to reduce police budgets.

The rise in crime rates has caused some in the Democratic Party, including President Joe Biden, to advocate for increased funding for community policing. And after a weaker-than-expected showing in the House elections in 2020, moderate Democrats such as Rep. Abigail Spanberger (Va.) told other members of her party that they need to avoid using the phrase “defund the police.”

McCarthy’s comments come in the midst of political conflict over police reform on Capitol Hill. Sens. Tim Scott (R., S.C.) and Cory Booker (D., N.J.) appeared to be making progress toward a bipartisan policing reform bill but reportedly ran into a roadblock over the issue of ending qualified immunity. Rep. Karen Bass (D., Calif.) is insisting that the legislation include the elimination of the legal protection for police officers, which Scott said he adamantly opposes. Scott introduced police reform legislation last summer after the death of George Floyd, but the legislation was filibustered by Senate Democrats.

“Law enforcement and their families are American heroes. They deserve our appreciation and proud support,” McCarthy told the Free Beacon. “That is what Republicans showed this week, and what Democrats were silent about.”