Jeff Younger, Rep Slaton Make Final Plea To End Transgender Surgeries For Kids, ‘This Should Not Be Happening In Texas’ 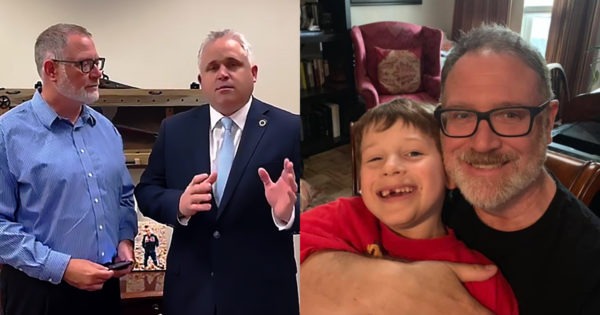 Bills to stop child chemical castration and transgender surgeries in Texas have been stalled by the Republican legislature, effectively killing H.B. 1399 – which would strip liability insurance from doctors who perform such acts in the states – when they scheduled it with hundreds of bills left to pass and only days left in the session. Now, Jeff Younger, the father of 9-year-old James Younger, whose mother began forcing him to wear dresses and telling him he is a girl at only two-years-old, has recorded a video with Texas Rep. Bryan Slaton, pleading with the Texas legislators who are working against young children, and asking viewers to call Rep. Stephanie Klick and Rep. Dustin Burrows in a bid to pass another bill that would classify these types of surgery as child abuse.

“I’m honored to have my good friend Jeff Younger here today, and we’ve got an update for you,” Slaton began in a video recorded yesterday. “We are still currently, in the House, working on Monday’s calendar. The bill to protect his son, HB 1399, was scheduled on Wednesday’s calendar on page 8 out of 10. There are literally hundreds of bills in between our first one today and the bill that would protect his son and other children from child gender modification. That’s very sad and unfortunate, and very frustrating as well.”

“Where we’re at now, we have a week and a day, and the only bill left is Senate Bill 1646, it’s passed the Senate and it’s referred to the Public Health Committee, so now where we’re at, Chairman Klick is Chair of Public Health, once it’s voted out of there it goes to the Calendar Committee, that’s Chairman Burrows,” Slaton explained. “We’re literally right back where we were, with a week and a half to get things done. What I’m asking you to do is get on your knees and pray. This should not be happening in Texas, and I want you to also think, if this was your child or your grandchild, what would you want an elected official to do?”

Burrows urged members of the public to call Klick and Burrows and express their frustration over the stalled legislation, and urge immediate action to pass SB 1646, which would classify attempts to force transgenderism on children as child abuse. Slaton then allowed Younger to tell the viewers about his years-long legal battle to help his son, who has always identified as a boy when with his father, but was forced to wear dresses and present as a girl with his mother. (READ MORE: Father of James Younger, Whose Mother Says He’s Trans, Urges Texas To Pass Bill Ending Child Trans Surgeries)

“I keep asking myself why do we have to work this hard to get our elected officials to protect children in this state? All of them actually agree with us, privately they’ll tell us they agree with us,” said Younger. “The Calendars Committee, which intentionally delayed HB 1399, and put it at the end of the calendar so it can’t be heard, which is a time honored technique for killing bills here at the legislature. Of the Republicans on that committee, five of them are authors of the bill. They never voted to schedule their own bill.”

“The game is being played on you, the grassroots, Republican voters, conservative voters. They want you to think they’re conservative by producing these bills, then they go with the liberal establishment and delay these bills so they’re never voted on. So they please both masters, you and their liberal controllers here in Austin,” Younger explained. “Let me tell you how that feels as a father: They know about my son, all of them have seen pictures of my son. The only person who has stood up in the legislature, using ever parliamentary trick available, using every means of persuasion, and in some cases means of coercion, has been this man right here,” he added, gesturing toward Rep. Slaton.

“The bill author for 1399 hasn’t even showed up to any of the press events or rallies that we’ve held, only he’s showed up. I’ll tell you how that feels when you’re a father and your kid is facing physical castration, chemical castration gender clinics. It feels like the Republican Party and the State of Texas government has abandoned your child to the most horrible fate,” Younger described. (READ MORE: ‘YOU WILL BE PRIMARIED’: Texas Republican Confronted By Constituent He Called ‘Trash’ For Trying To Stop Child Sex Changes)

Younger then urged viewers to call Klick and Burrows, and urge them to take immediate action to protect children like his son, who in Texas are considered too young to smoke, drink, drive, consent to sex, serve in the military, or vote, but are currently allowed to have life altering surgeries and chemical castrations in a bid to present as another gender.

National File recently interviewed Younger, who described his legal battle to protect his son. “The big donors in the Republican Party are at odds with what the voting base wants. When it comes down to it, Governor Abbott, Dade Phelan, Lt. Gov. Dan Patrick, a lot of times they go with what the donors want and not what Democracy is telling them to do,” Younger told National File last weekend. “We need to let Abbott know that if he doesn’t [sign the bill], we’re going to use this wedge issue against him and he won’t have a political future in Washington like he hopes he does.”