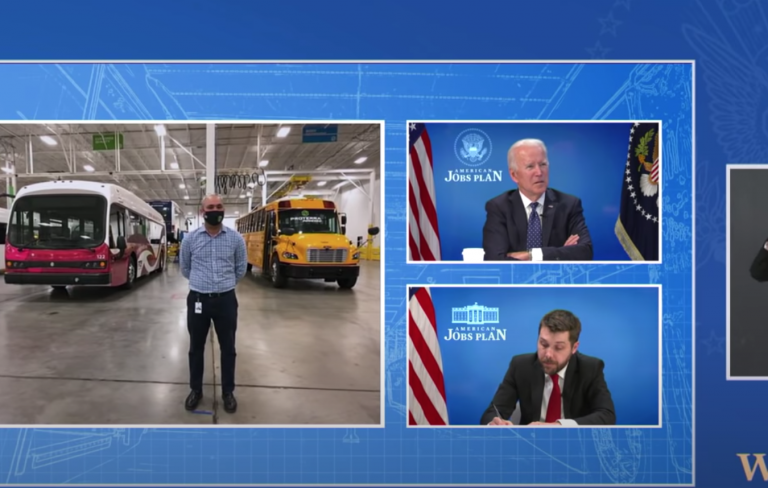 Energy Secretary Jennifer Granholm on Friday offloaded hundreds of thousands of shares in Proterra amid a firestorm over her financial ties to an electric vehicle company repeatedly promoted by the Biden administration.

Granholm reported the transaction in an Office of Government Ethics divestiture certificate, which the agency released Tuesday morning. It is unclear how much Granholm made in the sale, as Proterra is a private company. The former Michigan governor reported selling more than 240,000 shares in the electric bus manufacturer. She previously valued the stake at up to $5 million in a January financial disclosure.

The White House and Department of Energy did not return requests for comment on whom Granholm sold her shares to, as well as how much she made from the sale.

Granholm played a leading role in shaping the administration’s infrastructure package. Biden tasked her with “identifying risks in the supply chain for high-capacity batteries, including electric-vehicle batteries, and policy recommendations to address these risks.” The legislation now includes a $174 billion investment in the electric vehicle market and creates a Clean Buses for Kids program in order to “electrify” at least 20 percent of the nation’s school buses. Proterra opened a battery manufacturing plant in California just weeks after Biden’s election.

In addition to Biden’s virtual tour of Proterra’s South Carolina factory, the Democrat in May hosted company CEO Jack Allen at the White House’s Leaders Summit on Climate. Biden national climate adviser Gina McCarthy praised Proterra for its “amazing” work at the summit and asked Allen “what role” the federal government can play in “spurring the demand for zero emission electric vehicles, including school buses.”

Both Granholm and Allen also spoke at the conference, as the CEO thanked Biden for his “longstanding support of electric transit buses and zero emission transportation.”

Proterra is set to go public this year following a January merger with ArcLight Clean Transition Corp. ArcLight stock is up roughly 35 percent since the merger’s announcement.

In other news...
FCC: Never seen anything like this before
Suspected U.S. pipeline hackers say they don’t want...
RECIPE FOR DISASTER: How Packing The Court Will DES...
China will own space, Gordon Chang
What About the Confusion of Our Leadership in Washi...
Biden Regime Backs Away From Colonial Pipeline Hack...
0 Comments
Inline Feedbacks
View all comments