May 9, 2021 Constitutional Nobody Education 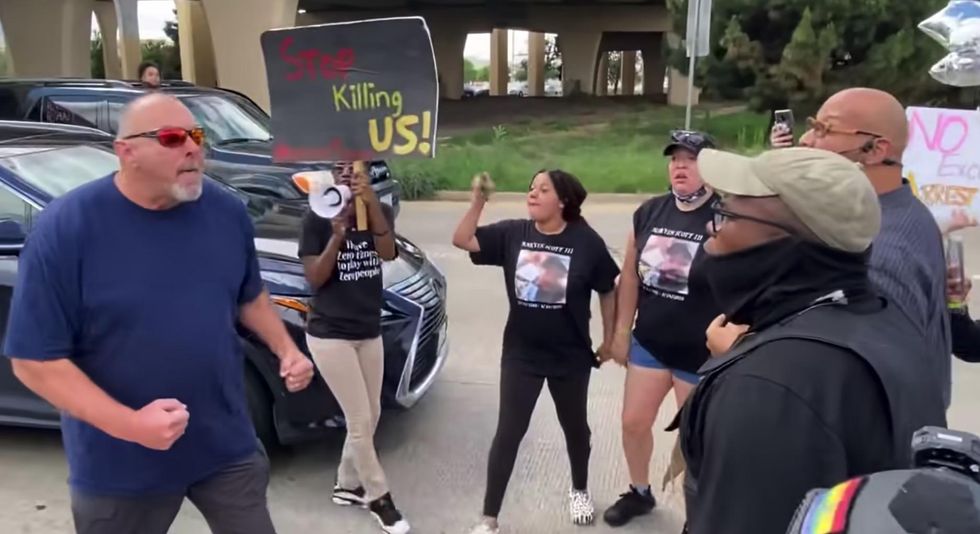 Video of a Texas motorist confronting protesters blocking a busy intersection has gone viral. The video shows a police officer seemingly permit the protesters to block traffic from flowing through the intersection.

“Get the f*** out of my way!” the man screamed. “Where’s the godd*** cop?” He then found a cop standing by the intersection, who was seemingly allowing the protesters to block traffic.

“Get these f***ing people out of the way!” the man screamed at the cop. “They can’t be standing in the middle of the road!”

The protesters then swarmed the man as he squared up to fight. One of the demonstrators, attorney Lee Merritt, attempted to intervene to de-escalate the situation, the Observer reported. As tensions quickly rose, the officer escorted the angered motorist away from the protesters and back toward his car. The video did not show the police officer clear protesters from the intersection.

According to the Dallas Observer, protesters were demonstrating after 26-year-old Marvin Scott III died while in police custody in March. Seven of the eight police officers allegedly involved in Scott’s death, which was ruled a homicide, were fired, while the eighth officer has since resigned.

Hava Johnston, who was involved in the protest, said demonstrators were making their way to a nearby Chick-fil-A when they crossed through the intersection and blocked traffic.

Johnston told the Observer the enraged motorist should have been arrested for his actions, claiming a black man would have been.

“The question is: Why wasn’t that guy treated the same way that a person of color would have been treated?” she said.

The Plano Police Department has not publicly addressed the incident.

Click this link for the original source of this article.
Author: Chris Enloe