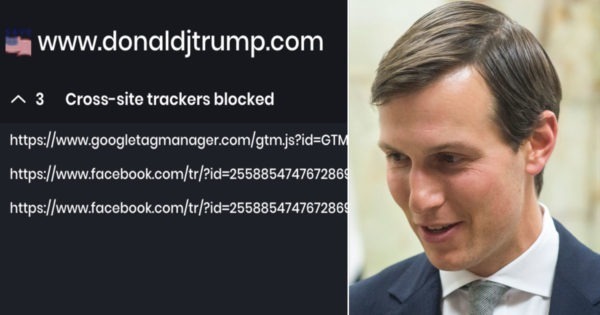 As Donald Trump’s new blog launched this week, Facebook’s ADL-supported “Oversight Board” upheld the corporate monopoly’s decision to permanently ban Trump from the platform. Despite this, the President’s new blog is loaded with trackers from Facebook and Google, and features prominent share buttons for Facebook and Twitter while ignoring the free speech platforms used by the majority of Trump supporters, such as Gab, Telegram, and Parler.

Gab CEO Andrew Torba was among the first to uncover the tracking pixels embedded in the new blog that Trump launched on Tuesday called “From The Desk Of Donald J. Trump.”

Despite the fact that the new blog has zero user-oriented features aside from allowing Trump to post his email messages from the Save America 45 PAC directly to the site, the blog features many prominent donation buttons that encourage supporters to donate up to $5,000, including a $250 button that is prominently animated and jumps around the screen.

No indication is given as to where the donations will go, other than a vague message that states “President Trump is calling on you to step up and become a founding member of his Save America team.” Donators are apparently supposed to become ecstatic at the thought of President Trump potentially seeing their name on a “Founding Member Donor List.” 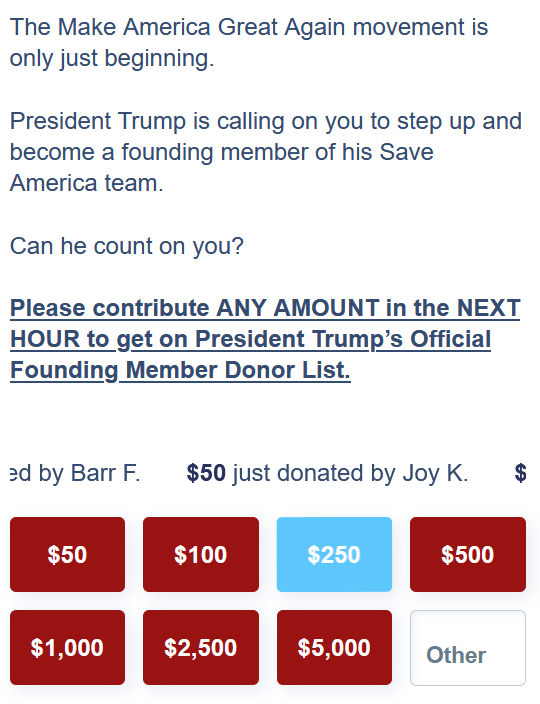 Trump supporters are also encouraged to share the President’s posts to Big Tech platform Facebook and Twitter, the very platforms that moved to silence Trump and his supporters the most over the past five years.

“Why Trump’s people, specifically Brad Parscale, who built this platform, would allow Facebook and Google tracking pixels on this blog, is really beyond me,” Andrew Torba said in a video message explaining why Trump is still not on Gab. “It’s kind of ironic when you think about it, being that Facebook upholds this ban of Trump from Facebook and Instagram, and he has Facebook on his own website, allowing them to track his supporters as they come to read his messages on this website.”

Torba went to explain that his attempts to give President Trump a platform to use on Gab fell through when Jared Kushner and Brad Parscale pushed for Gab to turn user data over to them, and violate Gab’s free speech ethos by banning so-called “antisemitic hate speech” that Kushner found personally offensive.

As National File previously reported, Trump advisors Kushner and Dan Scavino teamed up in January to browbeat Trump out of replatforming himself on Alt Tech.

In other news...
A Deep Insight Into The Globalist a.k.a
Trifecta: DARPA, IARPA And Now HARPA To Complete ‘D...
The Life and Legacy of John Basilone
Game, set and mask
32 Babies Had Surgery to Fix Spina Bifida While Sti...
Biden Backtracks, Quadruples Refugee Cap Only 2 Wee...
0 Comments
Inline Feedbacks
View all comments