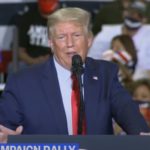 No matter the facts, Trump is still insisting that he was the rightful 2020 election winner. Trump’s self-obsessed refusal to acknowledge the basic reality of the well-documented integrity of the 2020 presidential election is just pathetic.

Throughout the months that Trump and some of his top political allies have spread their delusional lies about the 2020 presidential election, they’ve never even offered a comprehensive overview of how the supposed fraud took place. Who was in charge? How did whoever was in charge get election workers (and others whose cooperation would have been required) to go along with the scheme? Where was the fraud planned? Where are the communication records? Where are the tens of thousands of people whose participation would have been needed to implement a nationwide election-rigging scheme?

Neither Trump nor his associates have been able to meaningfully answer these questions — because, of course, there’s nothing legitimate there. Trump so far hasn’t faced any defamation litigation over his election conspiracy theories, but a selection of his associates — including Rudy Giuliani, Sidney Powell, and Mike Lindell — are facing lawsuits. No matter the billions of dollars worth of defamation claims between them, neither Giuliani, Powell, nor Lindell have conclusively acknowledged the falsity of their claims.

Now, NBC reports that on the scene of an ongoing GOP-led audit of presidential election ballots in Maricopa County, Arizona, the far-right outlet One America News has reported that “audit workers were using ultra-violet light to search for watermarks — a possible reference to a thoroughly debunked QAnon conspiracy that Trump secretly watermarked ballots to prove voter fraud.” The breadth of this delusion is staggering. How do these people even operate in the real world on a daily basis? These ideas are not based in reality.

In other news...
Anti-Police Rhetoric Emboldens People Like This Rac...
What the Media Won’t Tell You: The Root Cause of Ri...
Biden Admits Defeat, Plans to Bring Back Trump Immi...
Form for Employees Whose Employers Are Requiring Co...
White House Press Briefing with Jen Psaki and Tom V...
Strange Bedfellows: GMO and Vaccine Partnerships
0 Comments
Inline Feedbacks
View all comments