May 2, 2021 Constitutional Nobody Survival

Over 500 pro-life laws have been introduced across the nation so far in 2021, according to a recent analysis from the pro-abortion Guttmacher Institute, the former research arm and “special affiliate” of Planned Parenthood.

“Since January, there have been 536 abortion restrictions, including 146 abortion bans, introduced across 46 states (all counts current as of April 29, 2021). A whopping 61 of those restrictions have been enacted across 13 states, including eight bans,” Guttmacher noted.

“Between April 26 and April 29, 28 new restrictions were signed into law in seven states — almost half (46%) of the restrictions passed so far in 2021. This was the highest number of new restrictions signed in a single week in at least a decade. That count includes multiple abortion bans that directly challenge Roe: a near-total ban on abortion in Oklahoma, six-week abortion bans in Idaho and Oklahoma, a 20-week ban in Montana, and a ban on abortion for non-lethal genetic anomalies in Arizona.” Guttmacher added. 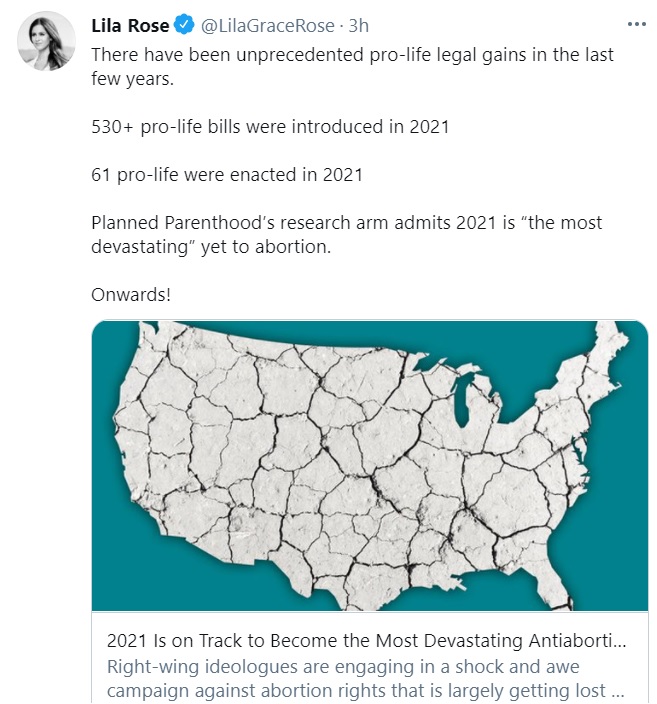 While the pro-life community is hailing the news as good, abortion advocates are concerned.

“To put those figures in context, by this time in 2011 — the year previously regarded as the most hostile to abortion rights since Roe was decided — 42 restrictions had been enacted, including six bans,” Guttmacher wrote.

In an interview with The Recount, Planned Parenthood president Alexis McGill Johnson expressed concern over pro-life laws like heartbeat bills, calling them a deliberate attempt to “try and position a fundamental challenge to Roe.”

Planned Parenthood’s president referred to the life-affirming legislation as “weaponizing” and claimed pro-life laws are simply an “onslaught” to “winnow [abortion] access.”

Of course, abortion “access” is the bread and butter of Planned Parenthood, fill the organization’s self-described “bucket of money” significantly.

“Across the nation, state lawmakers acting on the will of the people are taking bold steps to humanize our laws and challenge the radical status quo imposed by Roe v. Wade,”  Dannenfelser wrote. “The 61 new laws enacted and hundreds of bills introduced include legislation to stop late-term abortions after five months of pregnancy, end lethal discrimination against unborn children for reasons like a Down syndrome diagnosis, protect unborn babies from the moment their heartbeat can be detected, safeguard women from dangerous abortion drugs, and more. We’re grateful to all our state allies and have been honored to work together to advance many of these vital protections.”

“We…know Roe is the floor…” Planned Parenthood’s president claimed. “Roe is not working,” she added.

When asked if there was a “path to ensuring some kind of stability [on abortion rights],” the Planned Parenthood president replied in typical fashion, “building and holding power.” Power is critical to Planned Parenthood.

The organization’s past president Cecile Richards once told NBC’s Chuck Todd that she was helping to turn Planned Parenthood into “the largest kick butt political organization.”

Richards’ replacement, Dr. Leana Wen, who was later outsted for failing to focus on abortion and expand their political power, tweeted regarding her departure, “The new Board leadership has determined that the priority of Planned Parenthood moving forward is to double down on abortion rights advocacy.”

While Planned Parenthood and others in the industry cry foul over every reasonable abortion restriction, the fact of the matter is that unrestricted abortion on demand is what is being “weaponized” to fuel abortion empires like Planned Parenthood, and the numbers prove it.

According to Planned Parenthood’s 2019-2020 annual report, in just one year it accumulated nearly $70 million in excess revenue over expenses while recording net assets over $2 billion.

The post Report: Over 500 pro-life laws already introduced in US in 2021 appeared first on Live Action News.