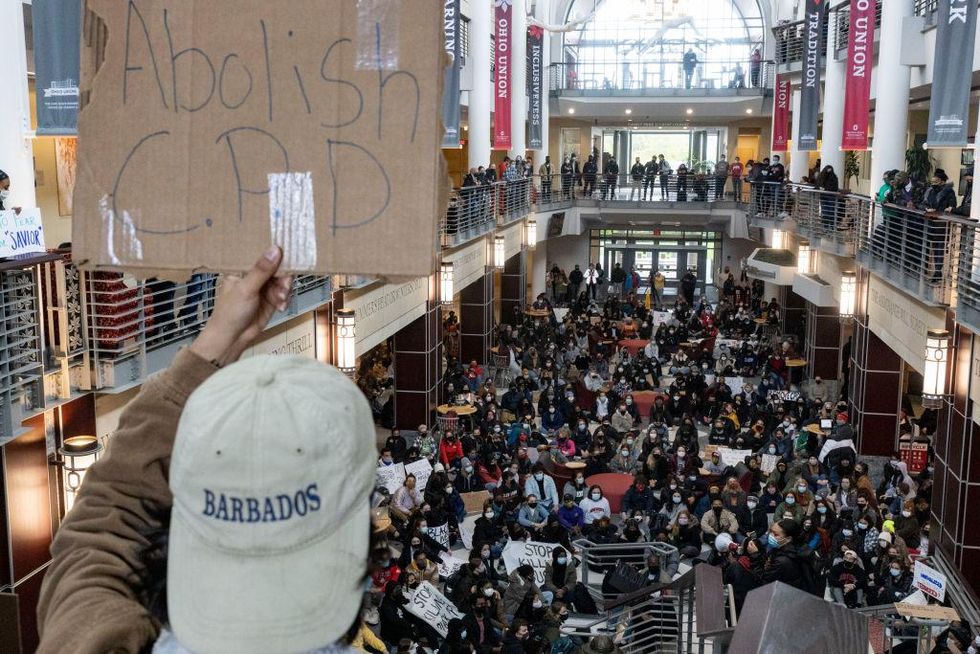 Students at Ohio State University staged a sit-in protest Wednesday over the fatal police shooting of a teen girl wielding a knife who attempted to stab two people. The protesters demanded that the university sever ties with the Columbus Division of Police, the Ohio law enforcement department whose officer shot and killed 16-year-old Ma’Khia Bryant at the exact moment she lunged with a knife at another girl.

Several hundred protesters gathered at the Ohio Union, which serves as a student activity center and dining area for students of Ohio State University. Students held signs that called for the city of Columbus to abolish its police department, support for Black Lives Matter, another sign that demanded “CPD out of OSU,” and one that reads “ACAB,” an acronym for “All Cops Are Bastards.” The crowd of Ohio State students held a 16-minute moment of silence for Bryant.

A spokesperson for the university issued a statement on the protests: “Ohio State supports the right of our students, faculty and staff to peacefully express their views and to speak out about issues that are important to them. Freedom of speech and civic engagement are central to our values as an institution of higher education.”

Huge crowd of @OhioState students now taking the streets to demand OSU cut ties with @ColumbusPolice after the kill… https://t.co/fhLRZGEfqP

The demonstrators issued a list of five demands, which was the same list that was written by three Ohio State student governments in June 2020 as a reaction to the police-involved death of George Floyd.

On Wednesday, the school responded to the demand of cutting ties with the Columbus Division of Police, “The Ohio State University Police Division (OSUPD) is the primary law enforcement agency on all of our campuses. In Columbus, we contract with the Columbus Division of Police (CPD) for specific services, largely traffic control for athletics events. We also have a mutual-aid agreement in place that allows our OSUPD to assist CPD off campus.”

Last June, an Ohio State University spokesperson issued a statement on the list of demands:

As President Drake wrote on Saturday, George Floyd suffered a horrendous and completely unnecessary death. His killing, and those that have come before, demand that we create a different future. We know our students are hurting, we are here to support them, and we are inspired by their commitment to this cause. We must all work together to end abuse, discrimination, bigotry, and hatred. We will be in dialogue with our student government leaders about the specific concerns they have raised.