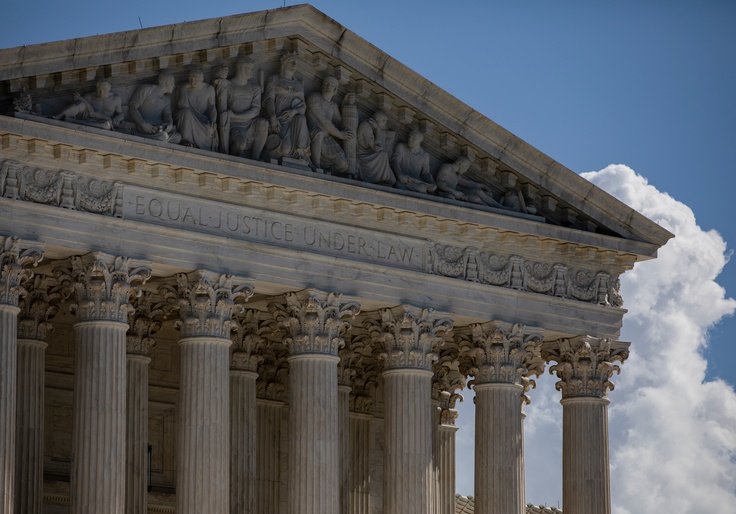 Brandi Levy was at a convenience store called Cocoa Hut when she posted a Snapchat that would land her in the Supreme Court.

The rising sophomore wanted to broadcast her anger after learning she would spend a second year on the JV cheer squad at her Scranton-area school. “Fuck school fuck softball fuck cheer fuck everything,” Levy captioned a selfie in which she held up the middle finger. Her coaches removed her from the team after they saw a screenshot of the photo. That punitive step set off a major First Amendment battle over school power to police student speech off campus, which the justices will consider later this month.

School administrators determined to enforce new ideas about racism, sexuality, and privilege have similarly taken to punishing students for statements made beyond the schoolhouse door. Those administrators argue that certain harmful views warrant punishment no matter where or how they are expressed. The High Court’s decision in Levy’s case could put a major check on those efforts.

“Our culture currently is experiencing a dangerous trend of punishing individuals for speech on social media with the intent and effect of stifling ideas,” lawyers for the libertarian Cato Institute wrote in legal papers supporting Levy. “Empowering school administrators to punish students for anytime-anyplace speech creates an incentive for students, parents, and staff to engage in informant-style behavior that is anathema to American values.”

The Supreme Court said in a 1969 case called Tinker v. Des Moines School District that schools can regulate student speech that undermines discipline or interferes with operations. Levy’s coaches claimed that her Snapchat post, visible to 250 friends and classmates, disrupted the team and tarnished the school, which justified removing her from the squad until the next academic year.

Citing Tinker, most lower courts have held that administrators can punish students for off-campus speech. Some insist on a close connection to school affairs. Others are more lax, and say any speech likely to wind up in school is fair game for regulation.

But in Levy’s case the Third U.S. Circuit Court of Appeals went the other way and said Tinker simply doesn’t apply off campus. Conceived as a shallow First Amendment carveout, the court warned that Tinker has become “a vast font of regulatory authority,” since students are in touch about school on social media at all hours and in all places.

“Communicative technologies open new territories where regulators might seek to suppress speech they consider inappropriate, uncouth, or provocative,” the Third Circuit’s decision reads. “And we cannot permit such efforts, no matter how well intentioned, without sacrificing precious freedoms that the First Amendment protects.”

Critics say recent iterations of campus censorship aren’t well intentioned at all. The conservative legal group Alliance Defending Freedom is representing several college students who were punished for sharing views about gender and sexuality in line with their religious beliefs. They’re urging the justices to consider Levy’s case in its full cultural context.

“In our cancel culture, religious students are too often targeted for expressing their deeply held beliefs,” ADF senior counsel John Bursch told the Washington Free Beacon. “The Court should make clear that the First Amendment does not allow schools to censor students’ speech anytime and anywhere.”

ADF and other groups supporting Levy are urging the justices to announce a new First Amendment rule that tethers school authority to the campus itself and other school-supervised settings. That step, say Levy’s allies, will preserve parent primacy over discipline and discourage what the Cato brief calls an emergent “culture of snitching” that is eating away at free speech.

A handful of groups supporting the school district don’t want the Court to draw a bright-line. The Cyberbullying Research Center warns that bullying has flourished on digital platforms, and the consequences infect the school environment no matter where it happens.

“We urge the Court to consider the fate of another cheerleader, a two-hour drive away across Route 80 in northern New Jersey. Mallory Grossman was a 12-year-old middle school student who loved cheerleading and gymnastics but was tormented relentlessly by her classmates throughout the school year,” the center’s brief reads. “As the school year drew to a close, Mallory was unable to withstand these attacks any longer and took her own life.”