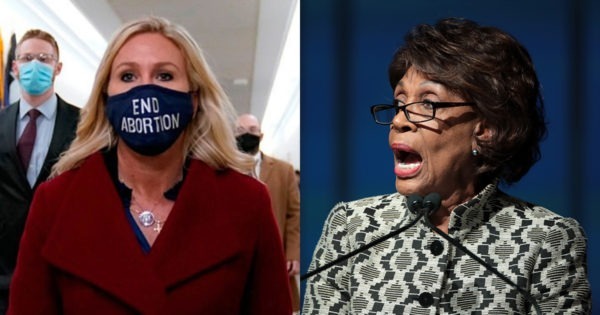 Rep. Marjorie Taylor Greene (R-GA) is preparing to introduce a resolution calling for the expulsion of Rep. Maxine Waters (D-CA) from the U.S. House of Representatives after Waters, while being interviewed at the scene of a riot, endorsed rioting and violence to achieve political goals, rhetoric which may have led to a rioter shooting at a National Guard soldier earlier today.

“Very soon I’ll be introducing a resolution to expel Rep. Maxine Waters from Congress for her continual incitement of violence on innocent American people. Rep Waters is a danger to our society,” wrote Greene. “After traveling across state lines to incite riots, her orders recorded on video last night at the Brooklyn Center, directly led to move violence and a drive by shooting on National Guardsmen in Minnesota early this morning.”

After traveling across state lines to incite riots, her orders recorded on video last night at the Brooklyn Center, directly led to more violence and a drive by shooting on National Guardsmen in Minnesota early this morning.

Last night, while being interviewed by the radical left wing Unicorn Riot during the ongoing civil unrest in the Minneapolis, Minnesota area, Waters said that in order to achieve guilty verdicts in high profile cases, “We gotta stay on the streets, we gotta get more active, we got to get more confrontational, we got to make sure they know we mean business.”

Early this morning, less than one day after she incited violence openly on the streets of Brooklyn Center – a city 15 minutes away from downtown Minneapolis and only 10 minutes from where suspected fraudster and convicted felon George Floyd was killed during an encounter with police – a National Guardsman stationed in the area was shot at in a drive-by style shooting.

“As a sitting United States Congresswoman Maxine Waters threatened a jury demanding a guilty verdict,” wrote Greene, “and threatened violence if Chauvin is found not guilty. This is also an abuse of power.”

As a sitting United States Congresswoman @MaxineWaters threatened a jury demanding a guilty verdict and threatened violence if Chauvin is found not guilty. This is also an abuse of power.#ExpelMaxineWaters

After the mostly peaceful Capitol Hill protests on January 6, Democrats moved to expel Greene from Congress, claiming that she incited an insurrection. Greene ultimately overcame the political theater, even while banned from Twitter, and has developed one of the largest fundraising programs in the Republican Party.

In other news...
Chauvin Convicted of Murdering George Floyd in Land...
Officer fired after it was revealed he donated $25 ...
Hero Down: Lexington PD Officer David Parde Dies Of...
Leslie Jones: ‘Let’s Get The Rest Of Them Motherf**...
Trump was right | Cory Mills
Biden and his administration keep claiming that rec...
1 Comment
Oldest
Newest Most Voted
Inline Feedbacks
View all comments
Pat