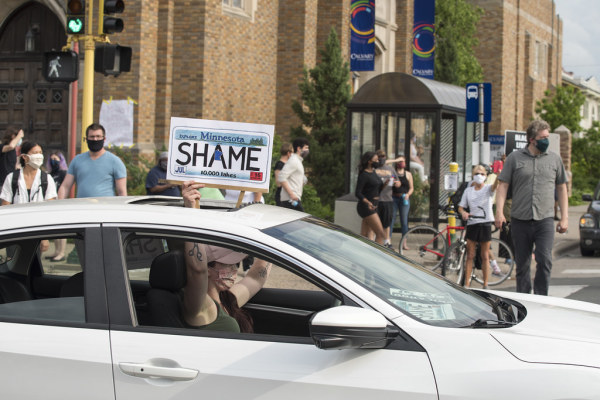 Court proceedings in the Derek Chauvin trial ended on Tuesday with the questioning of Barry Brodd, the owner of a consulting company specialising in police practices and the use of force. Brodd, the main witness of the day, was retained by the defence as a use-of-force expert. Nevertheless, the witness did not prove valuable for the defence, as the cross-examination succeeded to point out the weak links in his testimony.

Opening questioning by defence attorney Eric Nelson confirmed that Brodd was a certified defensive tactics instructor, which the witness defined as: “handcuffing, hands-on techniques, baton techniques, and pain compliance.” Brodd affirmed that he had been instructed by the defence to “analyse the actions of Derek Chauvin [on May 25th, 2020] and give opinions regarding his conduct and actions towards Mr Floyd” based on videos, miscellaneous statements, use-of-force policies, and training records. On direction by counsellor Nelson, Brodd confirmed that he had formed an opinion of the case to a “reasonable degree of professional certainty”:

“I felt that Derek Chauvin was justified and was acting with objective reasonableness, following Minneapolis Police Department policy and current standards of law enforcement, in his interactions with Mr Floyd.”

Asking Brodd to outline the policies relating to the historic case of Graham v Conor, Brodd explained that officers would acknowledge several factors in deciding whether to employ the use of force, including the “severity of the crime,” “the imminent threat,” the “reasonable fear that somebody is going to strike you, stab you or shoot you,” and the “level of resistance” of a suspect. Brodd asserted that in reviewing an incident, an expert would employ the scope of Graham v Conor and “try to see it through the eyes of the officers on the scene”:

“[You would look at] what factors were they dealing with, what circumstances, what was the suspect doing, what were onlookers doing, were there environmental hazards… You’d try to put yourself in the officer’s shoes to see if the decisions they made were objectively reasonable or not.”

Delineating his methodology in his analysis of use-of-force cases, Brodd utilised an example which he believed demonstrated officer Chauvin’s innocence, asserting that officers “don’t have to fight fair” and can escalate or de-escalate a situation in terms of use-of-force “in response to what a suspect is doing”:

“I’ll give you an example I used to teach my academy classes. Officers respond to a domestic violence situation, and the suspect is still there, and he fights with the officers and the officers are justified in using a taser to overcome this person’s non-compliance. They tase the individual and the individual falls to the ground, strikes their head, and dies. So that isn’t an incident of deadly force, that’s an incident of accidental death and in my review, I would look to see whether the suspect’s resistance, justifying the use of the taser, was objectively reasonable. If [a suspect] is fighting, you’re fighting back. You’re always trying to control them. Once they’re controlled, you reduce your justified levels of force, yet you’re still in control of the person. Anybody you take into custody you need to take control of.”

The next topic touched upon by the defence was the usage of drugs in the analysis of a use-of-force event. Nelson asked: “What relevance does possible drug influence have in an analysis?” Brodd responded:

“It has quite a large impact, in my opinion. People under the influence of drugs may not be hearing what you’re trying to ask them to do – they may not understand. They may have erratic behaviour, they may feel no pain, they may have superhuman strength, or they may have an ability to go from compliant to non-compliant in a heartbeat.”

Affirming that suspects under the influence of drugs should be handcuffed, Brodd acknowledged that the measures employed against Mr Floyd were “objectively reasonable” given his level of resistance. Notably, Brodd postulated that the officers would have been “justified in the use of even higher levels of use-of-force that they chose not to select,” affirming that the officers’ initial “manhandling” of Mr Floyd was justified after he “struggled against the efforts of the officers, kicking out at officer Lane.” Here, Brodd contended that officers were taught to place “any resistor, handcuffed or not,” on the ground in the prone position, noting that the prone control was safer as it would prevent a suspect from running into traffic or suffering asphyxiation through vomiting. Additionally, the witness affirmed a person would only be at risk of positional asphyxia if they were “very obese.” Ultimately, Brodd confirmed that he did not believe that the prone restraint would constitute a use of force:

“The maintenance of the prone control, to me, is not a use of force. It’s a control technique. It doesn’t hurt. You’ve put the suspect in a position where it’s safe for you, the officer, safe for them, the suspect, and you’re using minimal effort to keep them on the ground.”

The defence proceeded to instruct Brodd to outline how officers perceive the contention between a suspect’s actions and words. In reference to the case, Brodd stated:

“So you hear what the suspect is saying. So if I want Mr Floyd to get into the back of the car, and he’s saying ‘I will, I will, I will,’ but he’s not, then his actions are telling me he’s not getting in the car regardless of what he says. If somebody is saying ‘I can’t breathe,’ and it appears to me they are taking full breaths and shouting, to me the layperson, they can breathe.”

On the issue of the crowd’s interaction with the officers, Brodd stated:

“The officers were dealing with Mr Floyd but there were other factors for them to consider. In this case, the crowd started to grow in size and started to become more vocal. Officers are always trained to recognise what threat is the biggest threat – is it the suspect on the ground in front of me in handcuffs, or is it the unknown threat posed by the crowd who could go from verbal to trying to interfere with my arrest process in a matter of seconds? I could see that officer Chauvin’s focus started to shift from Mr Floyd to the crowd; at one point I think officer Chauvin felt threatened enough that he withdrew his pepper spray canister and gave verbal commands to the crowd to stay back – he was dealing with the bigger threat.”

Prosecution attorney Steve Schleicher then took to the stand for a markedly lengthy cross-examination of Brodd, in which he cast doubt on many of the details outlined in Brodd’s testimony. Prosecutor Schleicher immediately focused on Brodd’s assertion that officer Chauvin’s placement of Mr Floyd in the prone position had not constituted a use of force. Exhibiting a picture of officer Chauvin’s restraint of Mr Floyd, Schleicher queried:

“If it did, in fact, inflict pain upon Mr Floyd, would that change your opinion? Is orienting yourself on top of a person, on the pavement, with both legs, unlikely to produce pain?”

Brodd responded: “If the pain was inflicted through the prone control, then yes, I’d say it was a use of force. [The prone position] could produce pain if the officer’s intent was to produce pain.” Prosecutor Schleicher, obviously bewildered by Brodd’s statement, reiterated the point, with the witness eventually agreeing that officer Chauvin’s restraint could constitute a use of force without the infliction of pain. The prosecution then focused on Brodd’s assertion that only “very obese” suspects would be at risk of positional asphyxia, with Brodd conceding that positional asphyxia could arise purely as a result “of having your chest – your own body weight – on the ground in the prone position.” Furthermore, prosecutor Schleiter brought Brodd to acknowledge that the use of restraints such as handcuffs could exacerbate the risk of positional asphyxia.

The cross-examination of Brodd then featured the use of hypothetical facts in isolation by prosecutor Schleicher. The prosecutor would reference the Graham v Conor case in scenarios, culminating in Brodd agreeing with arguments favourable for the prosecution.

Another tactic employed by counsellor Schleicher was to formulate his questions for Brodd by isolating specific facts of the event and separating them from the contextual circumstances of the case. For instance, the prosecutor questioned Brodd’s insistence that Mr Floyd had been “actively resisting” in the “first couple of minutes” after being placed on the ground. Exhibiting short clips, prosecutor Schleicher cast doubt on Brodd’s assertion, highlighting a contradiction between the footage and his interpretation of the events. Again, on the issue of Brodd’s observation that officer Chauvin’s knees were situated at Mr Floyd’s “upper back and neck area,” prosecutor Schleicher exhibited photographic evidence, propounding: “That’s [officer Chauvin’s] left knee. That is above the area that you identified as Mr Floyd’s upper back, isn’t it? His left knee is on Mr Floyd’s neck in this picture, isn’t it?” to which Brodd agreed.

“Did he appear to say anything; do anything? Was he threatening or a major risk factor?”

Employing the same line of questioning with three further clips demonstrating the crowd at different points, prosecutor Schleicher argued that the crowd was calm and did not constitute a threat large enough to distract the officers from their attention to Mr Floyd. Brodd agreed. Ultimately, Brodd conceded that “the defendant did not alter the level of force that he was using on Mr Floyd, even though Mr Floyd had become compliant.” In an attempt to reinforce his earlier claims, Brodd asserted that Mr Floyd’s resistance to “rest comfortably” on the pavement would constitute an act of defiance. Undercutting the defence’s narrative, prosecutor Schleicher asked: “So attempting to breathe while restrained is an attempt not to be compliant?” Brodd replied, “no.”

In other news...
Ship Owned by Israeli Firm Attacked Off UAE coast: ...
Iran’s State Media Says Jews Are the Problem — Not ...
HIDIN’ BIDEN: POTUS Nowhere To Be Found As Kamala W...
Leaked emails from Senior Officials raise “urgent” ...
This 21 year-old influencer is fighting the race na...
Diamond and Silk are pissed off
0 Comments
Inline Feedbacks
View all comments