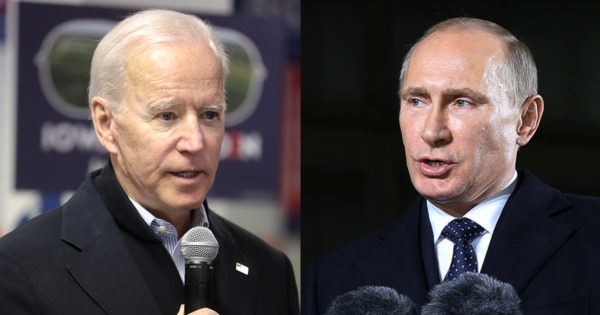 Today Joe Biden declared that he wants a one-on-one meeting with Russian President Vladimir Putin to discuss the growing tension between the two countries, even though he rejected a similar offer from Putin earlier this year.

According to national media, “Biden proposed to Putin that they meet in a third country ‘in the coming months’ as the leaders work toward ‘a stable and predictable relationship’ that is ‘consistent’ with the United States’s interests, according to a White House readout of the conversation.”

The readout reveals “President Biden reaffirmed his goal of building a stable and predictable relationship with Russia consistent with U.S. interests, and proposed a summit meeting in a third country in the coming months to discuss the full range of issues facing the United States and Russia.”

However, when Putin offered Biden an opportunity to speak with the American president one-on-one in live stream that could be televised and shared in both countries, Biden abruptly declined. According to the White House, he was “quite busy.”

“I’ve just thought of this now, I want to propose to President Biden to continue our discussion, but on the condition that we do it basically live, as it’s called,” Putin told a Russian state television reporter on March 18. “Without any delays and directly in an open, direct discussion,” Putin added. “It seems to me that would be interesting for the people of Russia and for the people of the United States.”

Rather than accepting the challenge to speak with Putin in a live discussion, Biden abruptly declined the opportunity, with the White House claiming it would be impossible as he is “quite busy.”

“​I don’t have anything to report to you in terms of a future meeting. The president will, of course, be in Georgia tomorrow and quite busy​,” White House Press Secretary Jen Psaki said later on March 18. Meanwhile, Putin was hoping the discussion could happen as early as March 19 or March 22.

“I don’t want to put this off for long. I want to go the taiga this weekend to relax a little. So we could do it tomorrow or Monday. We are ready at any time convenient for the American side.”