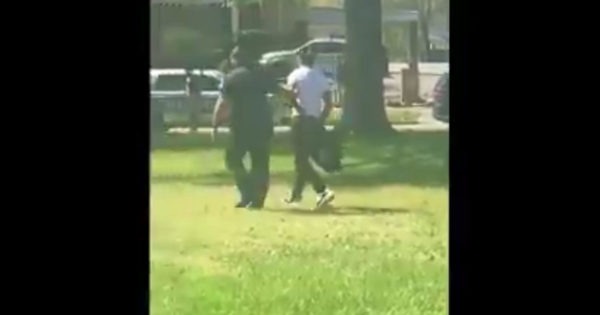 Video footage from the scene of a shooting at Austin-East Magnet High School shows police walking a suspect away in handcuffs. The suspect appears to be a black male in a white T-shirt.

Black Lives Matter rioters have committed violence and looting in Minneapolis after the shooting of a black male who resisted arrest.

National File’s previous reporting on the Knoxville shooting can be found here:

A mass shooting has been reported at Austin-East Magnet High School in Knoxville, Tennessee. Reports indicate multiple injured including a police officer.

“Multiple agencies are on the scene of a shooting at Austin-East Magnet High School,” The Knoxville PD Twitter accounted reported on Monday. “Multiple gunshot victims reported, including a KPD officer. The investigation remains active at this time. Please avoid the area.”

“I want to acknowledge a very difficult and tragic situation we have happening across the state right now. Austin-East Magnet High School there was apparently a school shooting,” Lee said. “For those who are watching online or otherwise pray for that situation and for the families and the victims that might be affected by that in our state.”