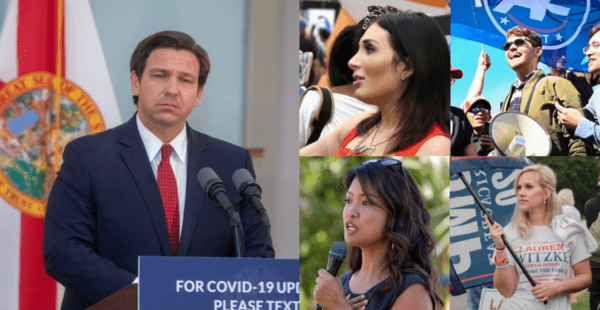 A number of America First commentators, including former Congressional candidate Laura Loomer, and Nick Fuentes, are demanding the proposed Big Tech bills in Florida’s legislature be strengthened with various amendments.

Florida Governor Ron DeSantis announced at the start of February a number of actions that would be taken against Big Tech by his administration, with the focus more on how Big Tech censorship and interference would effect elections within the state. As National File reported:

Some of the new regulations include a mandatory opt-out from content filters created by Big Tech companies, which can leave users “shadowbanned” without the need for full platform removal, a right of action for all Floridians against Big Tech companies who violated this, and a number of daily fines related to interference in elections, including a $100,000 daily fine levied for any company that suspends political candidates. DeSantis claimed that the Big Tech companies were the number one threat to democracy and freedom of expression in America.

Fox News’s Tucker Carlson remarked that the proposed action plan “really does set the standard for the rest of the country.” However, this is what a number of America First commentators currently fear, who argue that the Big Tech bills now put forward in the Florida House and Senate based on DeSantis’s plan go nowhere near far enough.

Laura Loomer, the former Florida Congressional candidate who was the first de-platformed candidate in US history, criticized the bills in two key areas. Loomer said that the fines proposed for Big Tech companies were “chump change” for the huge corporations, with the $4.6 million fine that Facebook and Google would have received for censoring her during 2019-2020 campaign only amounting to 0.006% and 0.002% of their 2020 revenues respectively. There is also no evidence to suggest that such fines would happen retroactively regardless.

“Paying a minor fine to prevent a candidate or candidates they don’t like from winning an election is a steal of a deal,” Loomer said. “In its current form, the wording of this legislation would make things worse for censored candidates, because it would give Big Tech an easy way to interfere with an election with minimal consequences in the form of small fines.”

Secondly, Loomer argued, there is no protection for constitutional speech in Florida’s Big Tech bills, and only requires the social media platforms to “apply censorship, deplatforming, and shadow banning standards in a consistent manner” among its users. “Sounds nice and all, but Zuckerberg and Dorsey read that as ‘Sweet! I can consistently ban conservative speech among all of my little users!’” Loomer argued.

The bills do attempt to protect media organizations as long as political candidates, but would not extend to small, independent journalists. The bills also only apply to social media companies, as in Facebook and Twitter, and does not address other forms of Big Tech censorship – conservatives and America First supporters are regularly banned from Uber, PayPal, Venmo.

As such, Loomer has been joined by a number of America First conservatives to encourage further amendments to the Big Tech bills to strengthen them. Nick Fuentes, the host of popular show America First, Michelle Malkin, conservative commentator and Newsmax host, and former Delaware Senate candidate Lauren Witzke have supported the call, all of whom have been subject to Big Tech censorship.

“While DeSantis’s proposed legislation does more to combat tech censorship than any previous effort by Republicans, the bill is seriously flawed and will not solve the problem unless it is amended,” Fuentes said, speaking exclusively to National File. “Specifically the bill must be expanded to cover financial deplatforming, censorship of independent journalists, and the restoration of social media accounts that have already been censored,” he added. Fuentes encouraged America First supporters to call the office of DeSantis to “request that he strengthen [the bills] with the amendments proposed by the America First coalition.”

We are calling the office of Governor Ron DeSantis to politely request that he strengthen the Florida tech censorship bill with the amendments proposed by the America First Coalition! pic.twitter.com/QiyFR1X48r

The proposed amendments to the legislation also include the targeting of ISPs and telecom companies, and increasing the fines to $250,000 nationwide. “We need to let them know that they cannot usurp the will of the people, cannot interfere with our elections, cannot become the arbiters of who is worthy to represent us, and cannot silence those who stand for free speech and free and fair elections,” the call to action states.

In other news...
British Soldiers BANNED from calling each other ‘La...
Stephen Miller: Joe Biden is not using tools he has...
Newslinks for Monday 12th April 2021
Justice Is Indeed Blind, Especially When Democrats ...
China’s trade attack ‘a case study in economic coer...
Public Kindergarten Enrollment is Plummeting—Here’s...
0 Comments
Inline Feedbacks
View all comments