April 8, 2021 Constitutional Nobody US News 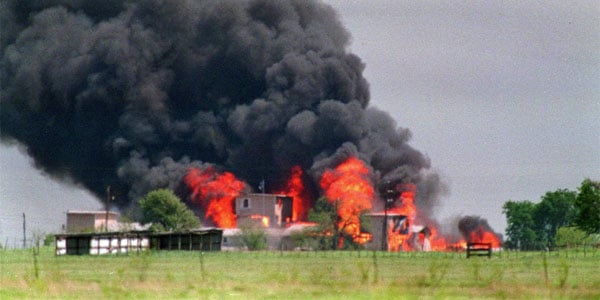 The gun control activist who President Joe Biden is expected to nominate to lead the Bureau of Alcohol, Tobacco, Firearms and Explosives (ATF) claimed last year that members of the Branch Davidian sect shot down two helicopters during a standoff with federal agents in Waco in 1993.

David Chipman, the expected nominee, posted the comments as part of a Reddit “Ask Me Anything” event. He also called for tighter gun control measures, including restricting gun sales only to licensed gun stores and a ban on the manufacture and sale of so-called assault rifles.

Biden is expected to announce Chipman’s nomination on Thursday during an event where he will lay out a series of executive actions aimed at reducing gun violence.

Chipman currently serves as a senior policy adviser to former Arizona Rep. Gabby Giffords, who was nearly killed after being shot by a gunman at a campaign event in 2011. CNN described Chipman Wednesday as a “fierce advocate for gun control.”

Chipman, who posted a photograph on the Reddit thread confirming his identity, commented on the Waco siege in response to a question from a participant who asked whether any crimes have been committed with .50 caliber Barrett rifles, which can be accurate up to thousands of feet from their target.

At Waco, cult members used 2 .50 caliber Barretts to shoot down two Texas Air National Guard helicopters. Point, it is true we are fortunate they are not used in crime more often. The victims of drug lords in Mexico are not so lucky. America plays a role in fueling the violence south of the border.

While the Branch Davidians did reportedly shoot at and damage a trio of helicopters that were flown over their compound, none were shot down, and no federal agents were injured.

“Although all of the three helicopters sustained damage from weapons fire, none of the National Guard crews or ATF aboard were injured,” reads a House report of an investigation into the siege that was released on Aug. 2, 1996.

Four ATF agents and 82 Branch Davidians died during a 51-day standoff, which ended when the religious group’s compound was burned to the ground after an FBI team tried to rescue children inside the building.

Twenty-five children died in the compound.

Chipman, a former ATF special agent, called for other stringent restrictions on gun purchases in the AMA thread, while acknowledging that he carries a concealed firearm himself.

In one post, Chipman said, “I believe all gun sales should be limited to licensed gun stores where a background check and paperwork is required.”

He also said he supports a ban on production and sales of assault rifles.

“It has been estimated that there are around 15 million assault rifles currently in circulation. I believe we should ban the future production and sale to civilians and afford current owners of these firearms the ability to license these particularly guns with ATF under the National Firearms Act,” he wrote.

While Chipman supports those restrictions, he said that he sometimes carries a concealed firearm.

“For the general public, seeing a gun out in public is a little frightening. To me, living in fear is a harm that we should avoid. When I carry I make sure it’s concealed. I’m not trying to make some statement.”

Chipman could not be reached for comment. The Giffords organization did not respond to a request seeking comment.