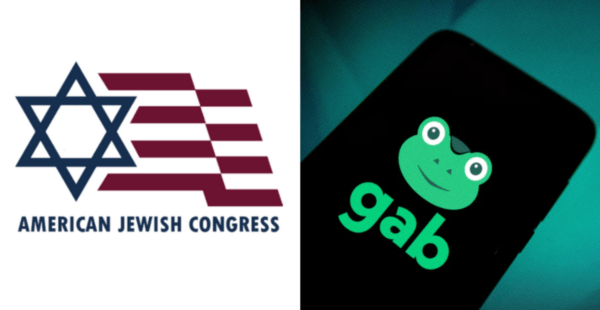 The American Jewish Congress picked a fight with Gab, and is now whining about “attacks” from CEO Andrew Torba who dared to respond to their unfounded and disreputable claims.

National File reported on Thursday on a press release from the AJC, which claimed that popular America First Representative Marjorie Taylor Greene’s use of Gab, the free speech social media network, to raise money from her supporters is a “threat to democracy.” The group claimed, without evidence, that the platform is “favoured by Neo-Nazis, white supremacists, and supporters of the anti-Semitic QAnon conspiracy theory movement.”

Andrew Torba, the CEO of Gab, responded to the smears from the AJC yesterday, noting that they have provided “ZERO evidence of ANY ‘incitement to violence’ on Gab that they claim exists here” because the site’s “zero tolerance” policy for threats results in them being removed almost immediately:

If people are discussing other topics that trigger the American Jewish Congress they are going to have to suck it up and deal with it because it’s not getting removed just because they don’t like it. Gab is a force to be reckoned with for the 2022 and 2024 political cycles. [Representative Marjorie Greene] is proof of that, which is why the Oligarchs are going to work even harder to attack Gab and shut us down.

Following Torba’s response to the unfounded smears, the AJC turned around and claimed that Torba and Gab were actually the ones attacking them, not the other way around. “We’re not going to mince words: Gab is a platform populated with Holocaust denying white supremacists and neo-Nazis,” the AJC tweeted. “We wear Gab founder Andrew Torba’s recent attacks on us with a badge of honour.”

We are not going to mince words: Gab is a platform populated with Holocaust denying white supremacists and neo-Nazis.

Marjorie Taylor Greene fundraises off of it regularly.

We wear Gab founder Andrew Torba’s recent attacks on us with a badge of honor. pic.twitter.com/cLEY19SoZ4

“Hilarious and pathetic to play the victim card as THEY attack Gab,” Torba responded in a post on the free speech platform. This is not the first time that Gab has been falsely labelled as anti-Semitic. Texas Governor Greg Abbott had previously slammed the platform as being so, with the Texas GOP later voting to censor themselves and remove their account. However, their Chairman, Allen West pushed back on this decision, and later made a Gab account of his own.