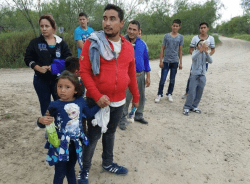 A new facility to hold unaccompanied migrant children was opened in Texas this week because the Biden administration is encouraging illegal immigration, a former border official said Wednesday.

The Carrizo Springs facility was not opened to comply with COVID-19 regulations as the Biden administration has said, according to former Acting Commissioner of Customs and Border Protection (CBP) Mark Morgan in an interview with Fox Business.

The temporary facility will hold up to 700 migrant children in hard-sided structures, and around 200 unaccompanied teenagers were transported to the facility Monday, CBS News reported.

“There’s so much hypocrisy, false narratives, and the president and his press secretary lied to the American people,” Morgan said. “Those facilities aren’t needed because of COVID, that’s absolutely not true, those facilities are needed because this administration is now encouraging, incentivizing, and facilitating illegal entry in the United States and the numbers have skyrocketed.”

“They’re reinstating catch and release, that’s why these facilities are needed because they’ve created a new crisis,” Morgan said.

Morgan continued, asserting that the administration is releasing illegal immigrants into the country and “preventing ICE from lawfully deporting 90% of those that they’re encountering here illegally.”

The Biden administration expected a need to reopen the privately operated Trump-era Carrizo Springs facility around two weeks before the first migrant children were taken to the center, the Daily Caller News Foundation reported. The Department of Health and Human Services said that children will be quarantined and tested upon arrival and that social distancing measures will be in place.

CBP did not respond to the DCNF’s request for comment.

In other news...
Indiana Corrections Officer Killed In Stabbing
The debate around Islamo-leftism ignites in France
Democrats Move To Silence Fox, Newsmax, OANN
ActBlue Facilitating Donations to Terror-Tied Chari...
COVID-19 Relief Package Could Send Up To $50 Millio...
The Overwhelming Evidence of the Origin of the COVI...
Try a better search engine at DuckDuckGo.com.