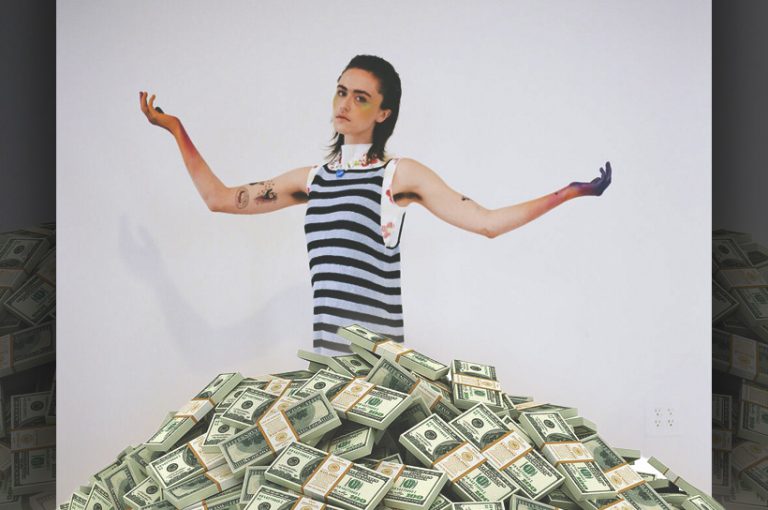 Ella Emhoff, stepdaughter of Vice President Kamala Harris, continues to benefit financially from the fact that her “Momala” is just one 78-year-old heartbeat away from the presidency.

Emhoff, 21, scored a major modeling contract with IMG Models just days after her stepmom was inaugurated, and made her runway debut last week during a virtual fashion show presented by Proenza Schouler.

The $1,300 haul might not be a significant sum for Emhoff. Her father, entertainment lawyer Doug Emhoff, and her famous stepmom have reported earnings of $11.5 million since their marriage in 2014. Unlike Hunter Biden, she does not bear the burden of being the sole breadwinner for her extended family.

Predictably, the media coverage of Emhoff’s overnight transition into a hipster fashion icon has been excessively fawning. The New York Times described her style as “Wes Anderson chic,” which is just a fancy way of saying “rich and white.” And yet, the fact that Emhoff has tattoos and doesn’t shave her armpits has compelled many to embrace her as a revolutionary figure bringing much-needed diversity to the fashion industry.

Not everyone agrees. Slate published an article, for example, making the (somewhat obvious) case that there isn’t anything particularly revolutionary or diverse about being a rich, white, tall, thin, female Brooklynite with tattoos and armpit hair.

Ivan Bart, president of IMG Models, told the Times that being a model is “not really about shape, size or gender anymore.” Emhoff was a perfect fit for the organization, Bart said, because she exudes “cheekiness” and “joy” and “communicates this moment in time.”

IMG is part of the entertainment conglomerate run by Ari Emanuel, brother of Rahm Emanuel, the former Obama chief of staff, and Patrick Whitesell, a Democratic megadonor who contributed more than $150,000 to Democratic candidates and committees during the 2020 election cycle.

Emhoff is hardly alone when it comes to first and second family members who have cashed in on the political success of the Biden-Harris ticket. President Joe Biden’s pledge that family conflicts of interest would not be tolerated in his administration is already being put to the test after just a month in office.

Biden’s brother, Frank Biden, has come under fire for touting his relationship with the president as part of his work for a Florida law firm. He was recently photographed (sans mask) at a Ft. Lauderdale birthday bash for boxer Floyd Mayweather. The vice president’s niece, Meena Harris, has been warned to stop profiting from her aunt’s image via her #Resistance clothing company.

Then there’s Hunter Biden. The First Son, who recently moved his family into a $5.4 million mansion in Venice, Calif., continues to cause headaches for the administration. He remains under federal investigation for potential tax crimes related to his shady business dealings in Ukraine and is reportedly still “working to unwind” his 10 percent stake in a Chinese investment firm.