Andrew Torba’s Gab promo message is so good it rates showing everyone. 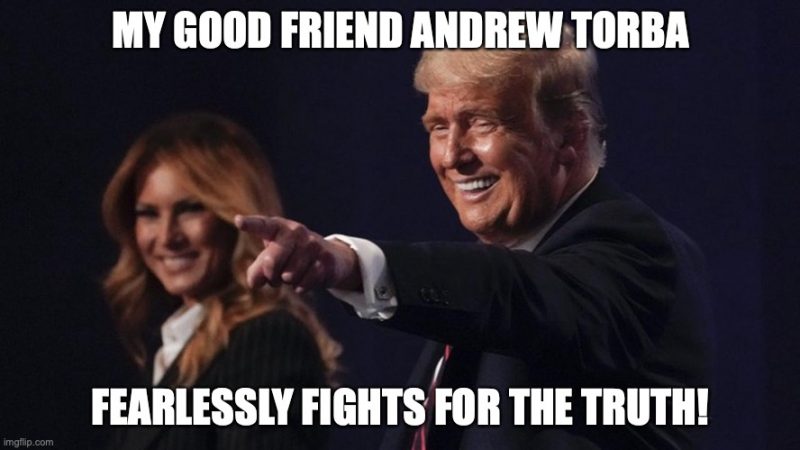 Sometimes, the news writes itself. In this case, Andrew Torba, an amazingly clear-minded person who runs Gab, a free-speech social media site that has been growing by leaps and bounds this year, sent out a mass email promoting not only his site, but our course ahead. It seemed so good that we just want to present that message to you. It is a promotional message, and we are leaving its promotion on, as we ourselves are active on the Gab site.

The problem with the American Populist movement is that it was centralized.

Centralized movements give the enemy a central attack vector to target and overcome. One man, who took on the weight of the world, became the sole focus of both the enemy and of the American Populist movement itself for over five years.

The oligarchs removed that one man from the entire internet, then they removed him from office. Everyone knows this, we all watched it happen. What no one has clearly defined is where American Populism goes from here.

The oligarchs believe that they have destroyed American Populism by rigging an election, removing the movement’s leader from public view, and by forcing everyone to stay locked inside for a year while the country burns down around us all.

They think they have won and want to define “New Normal” under their rule as they consolidate power. What they don’t realize is that they have recruited tens of millions of Americans to the side of reason, light, and Truth. Many millions of these people didn’t even vote for Donald Trump, but they recognize what is happening to our country and want to stop it.

Over the course of the past year I’ve seen comments across the internet become increasingly “red pilled” and aware of the Big Lies being pushed by the corporate media and frauds in government. It turns out that keeping people locked inside on the internet for an entire year ends up illuminating a lot of minds.

The People are learning what the real problem is: the globalist oligarchs. Not any one politician. Not this political party or that one. The entire system is corrupt. Banks, tech companies, media companies, schools, government, and on and on.

“You never change things by fighting the existing reality. To change something, build a new model that makes the existing model obsolete.”― Buckminster Fuller

The way around centralized problems in the movement is to decentralize American Populism at the local level. In order to take our country back and move forward with the American Populist movement we must first take our local communities back. Here are several examples of this happening across the country:

We must build our own economy. Here’s how.

Pull your positions out of their useless stock market and buy bitcoin, gold, silver, food stores, and ammo. Bitcoin is free speech money. Learn what it is and how to use it. Now.

National elections are a big distraction. Members of Congress are bought and sold like cattle by the oligarchs, foreign nations, and whoever has the money. Instead center your focus on getting American Populists and Christian men and women elected mayor, to state legislatures, as judges, on school boards, etc.

Cut the cable cord. That includes both Fox and CNN. Do not watch it. Do something else with your time and money. Support alternative media outlets and individuals. Get that garbage marxist indoctrination content machine our of your home and away from your family.

If your church has gone “woke,” leave. We have room for only one Gospel in Christian churches and that’s the Gospel of Jesus Christ. Not the imitation false gospel of “social justice.”

Create pro-family, pro-business, and pro-law and order policies for your local area. We can’t control DC, but we can control what happens in our backyards.

Pull your kids out of public schools where their minds are being molded at the altar of marxism. Do everything and anything you can to homeschool or attend Christian private schools or online schooling programs.

Pay attention to the brands you buy and support. Check out their websites and marketing. If they are “woke,” stop giving them your money. Period.

We must also work to unite American Populists on the left and the right. What unites the left and right wing populists, and Americans in general, is Jesus Christ.

The trasnhumanist nihilists and their technocracy are offering nothing of spiritual value. The Gospel Message of Jesus Christ, and that of American Populism, is one of redemption, hope, love, dominion, sovereignty, freedom and forgiveness. None of these things are possible with critical theory or woke consumer crony capitalism paired with a corporate techno tyranny.

What are you waiting for?

Let’s get to work, we have a new economy to build.

Well stated, Andrew. I stand with you.