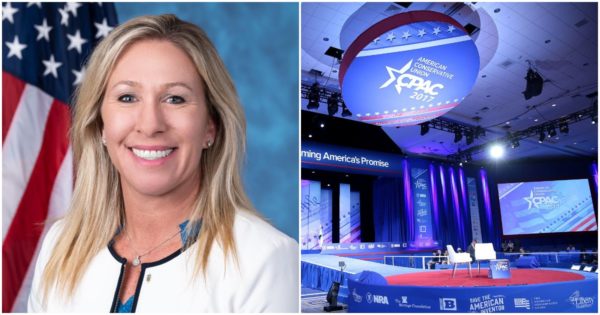 Pro-Trump firebrand Rep. Marjorie Taylor Greene (R-GA) is set to crash the 2021 Conservative Political Action Conference (CPAC), despite not being invited by the event organizers.

Sources close to the American Conservative Union, which hosts CPAC, the leading right-of-center political conference in the United States, confirmed to the National File that Rep. Greene had been left off the invited speaker list for the conference.

It is unclear what the rationale was for not inviting such a well known member of the House of Representatives. The American Conservative Union did not respond to a request for comment.

Despite this, Rep. Greene appears not to be relenting. She has apparently decided to attend this year’s CPAC as a private individual, despite not being granted a speaking slot.

Rep. Greene is also set to speak to events around the periphery of this year’s CPAC. One of these events is a reception set to take place at a hotel across the street from the CPAC venue.

We’re honored to have @mtgreenee join us for the Republicans for National Renewal CPAC open bar reception this year.

Rep. Greene has drawn condemnation from anti-Trump Republicans in Congress after the liberal media dug up years-old remarks she made on Facebook. Many of these Never Trumpers voted with House Democrats to strip her of her committee assignments.

Click this link for the original source of this article.
Author: Eduardo Rivero

In other news...
VIDEO: Australian Journalist Says Biden Is ‘Cogniti...
PSAKI: One-Week Break For Biden Spokesman Who Threa...
GOP Congresswoman Has A Bunch Of Guns In Her Backgr...
Republican Leaders Slam Biden for Not Calling Israe...
The Woman With The Beard Wins Second Prize
NASHVILLE POLICE: Fugitive murder suspect caught af...
Visit our Discussion Forum at Libertati.com. Follow us: