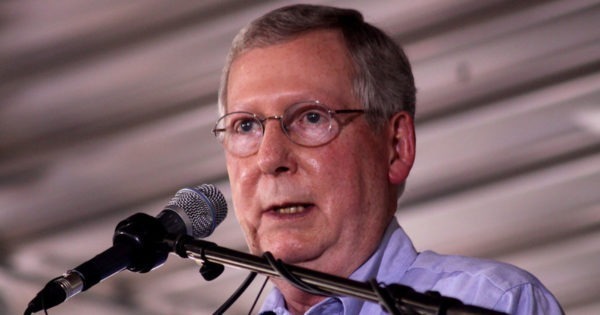 The Republican Party of Nelson County, Kentucky’s Chairman, Don Thrasher, authored a letter slamming Senate Minority leader Mitch McConnell on Wednesday, demanding that the Senator step down from office because his “leadership in the U.S. Senate does not represent the Republican voters that put our faith in you in the last primary election.”

“Given that the county party that I represent supports President Trump overwhelmingly and the complete and total disdain for the will of your constituents here in Nelson County I am formally demanding you resign your leadership position within our party’s caucus in the United States Senate,” Thrasher wrote.

Thrasher continued, “The overwhelming number of Republicans in Nelson County are not on your side on your side on this issue and I speak on their behalf. I cannot speak for other county parties in Kentucky but if my pressed for my thought I would say without reservation their constituents agree with my position on the matter.”

READ MORE: Trump Said Mitch McConnell Has Family Ties to China. Here’s What They Are.

“Your leadership in the US Senate does not represent the Republican voters that put our faith in you in the last primary election,” Thrasher concluded. “There I am formally requesting you resign your position as Republican Caucus Leader of the U.S. Senate, forthwith and with all possible dispatch.”

McConnell claimed, without evidence, over the weekend that President Donald Trump “fed wild falsehoods” to his supporters because “he was angry” and “he had lost an election,” and called for more investigations into President Trump, who McConnell claimed is “still liable for everything he did while he’s in office.”