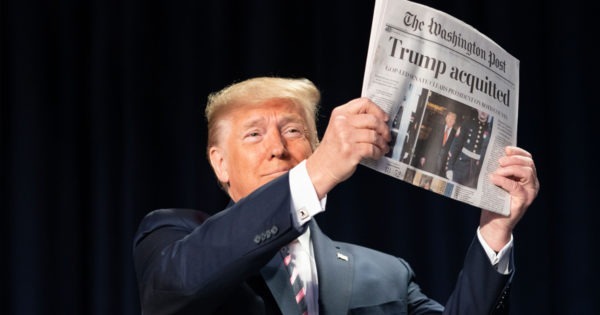 President Trump was acquitted by a largely party line vote, with Democrats voting in unison, and being joined by a series of anti-Trump senators who do not face elections for several years.

Sen. Mitt Romney (R-UT) voted to convict President Trump. He will not face reelection until 2024.

Sen. Susan Collins (R-ME) voted to convict President Trump. She will not face reelection until 2026.

Sen. Richard Burr (R-LA) voted to convict President Trump. He will not face reelection until 2026.

Sen. Ben Sasse (R-NE) voted to convict President Trump. He will not face reelection until 2026.

The total votes to convict were 57, versus 43 votes to acquit. Democrats were well short of the two thirds majority needed to convict.

This comes after Senate Minority Leader Mitch McConnell allegedly used the threat of a Senate conviction, which would require a two thirds majority, to influence President Trump’s final days in office.

According to Tucker Carlson, McConnell threatened to instruct Republicans to convict him if he issued presidential pardons to Julian Assange and other anti-establishment whistleblowers.

This is a developing story and may be updated with additional information.