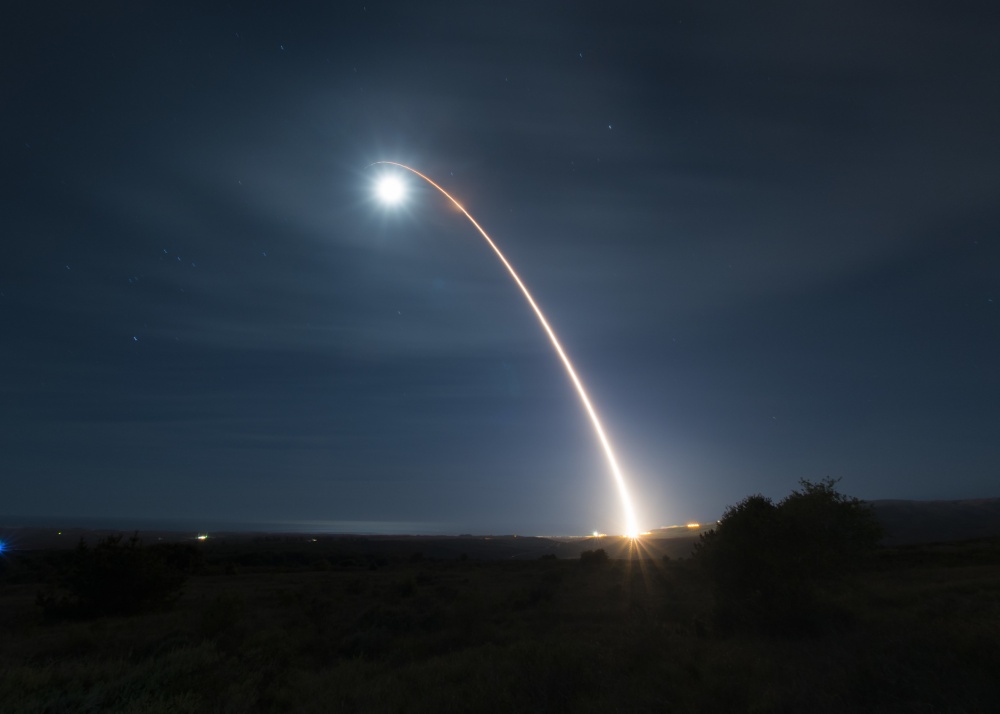 WASHINGTON: The Air Force’s combined spending on the Ground Based Strategic Deterrent (GBSD) and the B-21 bomber is likely to triple by 2027 to some $10.2 billion annually, as production begins to ramp up under both programs, the Cowen Washington Research Group estimates.

The $13.3 billion GBSD contract, announced yesterday by the Air Force, covers engineering, manufacturing and development (EMD) of the new ICBMs through 2029. The Cowen analysis, out today, notes that while the contract announcement does not explain whether LRIP is included, it can be assumed. This is because Air Force budget justification documents detail plans for “five option years” under the contract to include “early production and deployment,” author Roman Schweizer explains.

GBSD, which will replace the aging LGM-30G Minuteman III missiles that first became operational in 1970, represents one third of DoD’s top priority nuclear modernization effort. The third leg of the modernization program is the Navy’s planned buy of 12 new Columbia-class nuke-launching submarines, which the Pentagon’s 2021 budget documents estimate to cost $110 billion to buy.

The Congressional Budget Office in 2019 estimated the price tag for the total DoD triad modernization effort at $234 billion through 2028. This ginormous price tag does not include spending by the Energy Department to build the nuclear warheads that would be carried by DoD’s ICBMs, bombers and subs.

Northrop Grumman was the sole bidder for the GBSD program following Boeing’s decision last year to drop out over concerns about Northrop’s acquisition of one of the two makers of solid rocket motors in the country, Orbital ATK.

Cowen estimates that research and development spending for GBSD will jump from $1.5 billion in 2021, peaking at $3.07 billion in 2024, and decreasing to $1.9 billion in 2027. Production, the analysis says, will begin in 2027 with a budget of $2 billion. The Air Force’s press release yesterday says that it expects to begin deploying GBSD in late 2020.

The analysis is largely based on Air Force budget estimates through 2025, and Schweizer’s own projections. Of course, this means the numbers are squishy. That’s especially true for the B-21, whose program is highly classified.

Indeed, the number of B-21 bombers the Air Force intends to buy, originally set at 100, remains unclear.  As Breaking D readers know, senior service officials have been hinting loudly that they need more.

In addition, unit costs for the stealth bomber’s production are also classified. Way back in 2015, when the Air Force awarded Northrop Grumman the B-21 contract, it put a cap on the Average Production Unit Cost per aircraft of $550 million in 2010 dollars. “The APUC from the independent estimate supporting today’s award is $511 million per aircraft, again in 2010 dollars,” the release added. No updated assessments have been released. Several high officials have said the program is on budget and on schedule, without providing any details.

Finally, the production schedule and the count of how many are to be built each year, is classified, along with the planned annual procurement costs. That said, our colleagues at Bloomberg reported in February that internal Air Force budget documents show procurement starting in 2022 budgeted at $193 million. That jumps to $4.3 billion in 2025. Schweizer said in an email that his estimates are based on those numbers, and that the projections for 2026 and 2027 are his own.

Cowen’s analysis notes that Congress is by and large supportive of both efforts. While some have fretted that presidential candidate Joe Biden might reconsider building the GBSD, the document says that is not likely. After all, the Obama administration, during which Biden served as Veep, actually started the program.