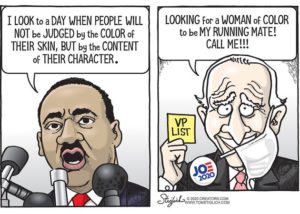 Another week, another several days of Leftist insanity. In a quick look under the hood, just as things started turning the corner in Bobworld, the jet fuel geniuses at Blogger (where I compose my posts) decided to drop on us a bunch of “upgrades” that nobody asked for. Hence some weird fonts in the post while I figure out an easy way to scrub out all of the extra garbage code that Blogger now forces into my posts. Might be time to look for another hosting site – any recommendations on the free side? OK, enough of my kvetching, on to the insanity:
8/6 – The High Costs And Low Benefits Of Electric Cars

Spoiler alert: Coal-powered cars aren’t all that.
8/8 – BLM/Antifa Terrorists Assail Old Ladies Defending Precinct
Another mostly peaceful assault strangely ignored by the press
8/9 – Most countries of the world ban mail-in voting due to fraud and vote buying
Is it time to ask why Democrats are insisting on this unlateral action that ignores the international community?
8/10 – More evidence that Americans are fighting back


People are fed up with the left, they’re getting their spirits back, and they’re remembering that America standard for one nation, under God, indivisible, with liberty and justice for all. I’ll give the last words to Mike Tyson, words that seem to have been written for those Antifa youth whose original training ground was getting into Twitter wars while sitting in their parents’ basements: “Social media made you all way too comfortable with disrespecting people and not getting punched in the face for it.”

8/11 – Schoolteachers worrying about parents overhearing their brainwashing of students in online classes
This had crossed my mind a few months ago. Maybe there is a silver lining to the teachers’ unions trying to help the Dems cripple our economy for teh election.

I could not disagree more with Tara Reade’s assertion that the Democratic Party has become an enabler to sexual predators. Where has she been for teh last 50 years?
8/13 – FAR-LEFT MELTDOWN: Democrats Severely Limit AOC’s Speaking Role At Convention
What a great position to be in – snub Gulag Barbie and offend your lunatic base, or let her speak and show the Normals the lunatics that have taken over your party. Popcorn, please!
8/14 – What the heck is going on with those retired military officers?
Disturbing. Be sure to click the link in the article to Kurt Schlichter’s take on this.
And on that cheery note, have a great weekend!

I fear Democrat sabotage of the election, including colluding with foreign agents to collect and distribute false information to media co-conspirators in order to weaponize our law enforcement & intell communities to spy on Republicans. Wait, she already did that.

Jim Acosta has literally tweeted more complaints about him being “booed” than he has about Molotov cocktails being thrown at courthouses by folks he supports https://t.co/g5oENnC3NV

Your name is literally kill all men pic.twitter.com/UMcuJPZr4J

@shaunking if you won’t vote for Biden then you ain’t black! Oh, wait a minute… https://t.co/rxSyVCdZOK

This content is courtesy of, and owned and copyrighted by, http://www.floppingaces.net and its author. This content is made available by use of the public RSS feed offered by the host site and is used for educational purposes only. If you are the author or represent the host site and would like this content removed now and in the future, please contact USSANews.com using the email address in the Contact page found in the website menu. The owner of this website may be paid to recommend American Bullion. The content of this website, including the positive review of American Bullion, the negative review of its competitors, and any other information may not be independent or neutral.