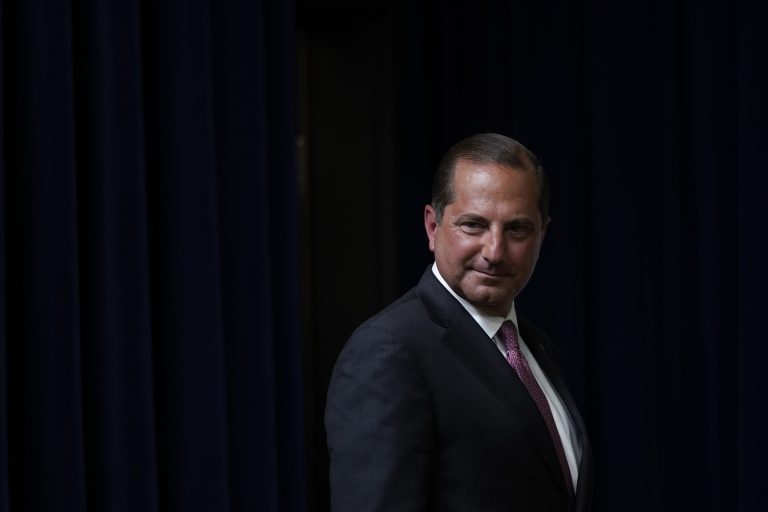 Health and Human Services secretary Alex Azar is scheduled for a trip to Taiwan in the coming days, a move that will see the United States lend its support to the embattled island as it faces a widening diplomatic war with China, which has sought to isolate Taiwan and bar it from key international forums, including the World Health Organization.

Azar’s trip will “demonstrate the robust U.S.-Taiwan partnership in health security, one of many aspects of our comprehensive and strategic bilateral relationship,” according to a senior Trump administration official, who discussed details of the trip on background.

The trip has already been met with opposition by China and is likely to further frustrate the Trump administration’s adversarial relationship with the Communist regime. China claims Taiwan as its own sovereign territory and U.S. administrations have historically avoided challenging Beijing’s claims in an effort to foster closer economic relations. As the coronavirus continues to ravage the globe, the Trump administration has helmed multiple efforts to hold China accountable for the virus’s spread. The Taiwan trip is yet another salvo in a diplomatic battle between Washington and Beijing that many have likened to the days of the Cold War with Russia.

“Taiwan has been a model of transparency and cooperation in global health during the COVID-19 pandemic and long before it,” Azar said in a statement. “I look forward to conveying President Trump’s support for Taiwan’s global health leadership and underscoring our shared belief that free and democratic societies are the best model for protecting and promoting health.”

Azar will work to boost relations with Taiwan and share in its experience battling the coronavirus, administration officials say. Azar will meet with senior Taiwanese officials, coronavirus experts, and medical researchers with the aim of increasing technology sharing between the United States and Taiwan. Azar also will deliver what U.S. officials described as a landmark speech in which he will argue for Taiwan’s inclusion on the international stage—a main source of irritation for China.

The Communist regime fought hard to keep Taiwan excluded from recent WHO meetings surrounding the coronavirus and is likely to view Azar’s trip as another provocative move from the Trump administration. Taiwan was among the first to report the existence of the coronavirus and has been key in combating Chinese propaganda claiming China was open with the world about the illness.

“The United States condemns Taiwan’s exclusion from the World Health Assembly in May 2020,” the senior administration official told the Washington Free Beacon. “At a time when the world continues to struggle with the pandemic, we need international organizations to deliver on their stated missions and to serve the interests of all member states—not to play politics while lives are at stake. “

In 2018, the Trump administration enacted the Taiwan Travel Act, which upgraded relations with the territory. U.S. officials see Taiwan as a source of economic freedom that can counter China’s regional police state and aggressive military posturing.

“Taiwan dealt with CCP malfeasance during the SARS crisis of 2003 and learned a valuable lesson,” the official said. “Since then, Taiwanese health authorities have not taken the Chinese government at its word on health-related information.”