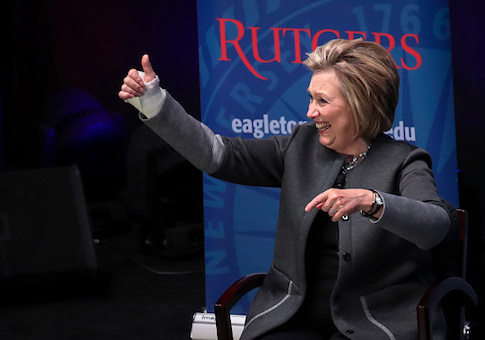 It’s becoming increasingly likely that Hillary Clinton, the historic failure of a politician, will enter the 2020 Democratic primary. She recently picked up her first official endorsement, and has wisely bided her time as two of the early frontrunners have succumbed to health problems on the campaign trail.

With Bernie Sanders (heart attack) and Joe Biden (cognitive dysentery) struggling to remain viable, the door is wide open for Hillary to rush in and remind the voting public why she’s still the most electable Democrat in the country. In fact, she’s already doing just that. While promoting her new book, co-authored with her daughter Chelsea Clinton (who inherited her mother’s natural charm and charisma), Hillary has returned to the public eye and become increasingly active on social networking platforms.

Ahead of her inevitable campaign announcement, Hillary continues to remind us why she is the undisputed “kween” of milquetoast platitudes, capable of transforming any hot-button issue into a heaping pile of meaningless drivel. For example, here is her take on the NBA’s embarrassing cowardice in response to Houston Rockets general manager Daryl Morey’s tweeted support for the pro-democracy protests in Hong Kong.

Every American has the right to voice their support for democracy and human rights for Hong Kong. Full stop.

So another massive American corporation has bowed to financial pressure, trampled on free expression, and appeased the authoritarian regime in China out of blatant self-interest. (Rockets ownership reportedly considered firing Morey for expressing an opinion that upset Beijing.) Hillary’s response is to assert that Americans have a right to say nice things about the protesters in Hong Kong.

What does it mean? Absolutely nothing. She’s still the same fearless and eloquent political juggernaut we so fondly remember from the time she lost to Donald Trump, or that time she tried to prevent the election of America’s first black president.

In other news...
Good News: Record jobs gain of 4.8 million in J...
Never-Trump Project Lincoln Co-Founder Paid By ...
Florida Sheriff Says He Will ‘Deputize’ All ‘La...
Has KFC Hired David Duke to Do their Marketing?...
Woman who underwent first face transplant in th...
Pompeo denounces ‘Marxist’ 1619 Project as gift...