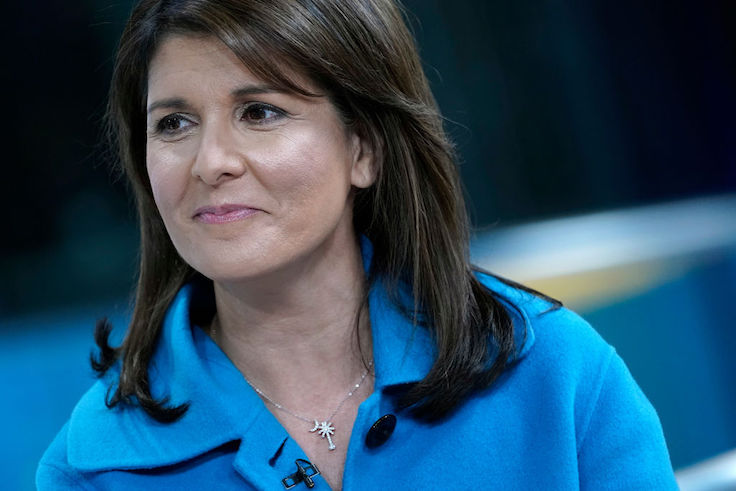 Former Trump administration ambassador to the United Nations Nikki Haley delivered a stinging rebuke of socialism on Wednesday during a speech at a prominent Washington, D.C., think tank.

“We must promise each other and future generations that America will never become a socialist country,” Haley said during a speech at the Hudson Institute, where she lashed out at prominent Democrats who criticize American capitalism and are pushing for socialism across the country.

Haley, who has long been rumored to want a shot at the White House in 2024, laid into Sen. Bernie Sanders (I. Vt.) and his allies in Congress. Her comments come as Sanders has surged to frontrunner status in the Democratic primary, winning the first three caucuses and primaries.

“Socialism is a total disaster, and as Americans, we must condemn it wherever it exists,” Haley said. “That is why it is truly amazing to see how socialism has become trendy in parts of America. These days it seems like socialism is everywhere.”

“It’s in our colleges and universities. It’s in Congress, where an up-and-coming congresswoman says, ‘Capitalism is irredeemable,'” Haley said in reference to progressive celebrity Rep. Alexandria Ocasio-Cortez (D., N.Y.). “It’s at the highest levels of society and politics. Right now, the Democratic presidential frontrunner is an avowed socialist named Bernie Sanders. Only in a prosperous country like America can people be so flippant about capitalism and so naïve about socialism.”

Conservatives should not be dismissive of the growing support for socialism in America, Haley said.

“This trend in America must be taken seriously. An entire generation has grown up without knowing the suffering caused by socialism in the 20th century,” she warned. “America’s collective amnesia is becoming a real threat.”

In her speech, Haley attempted to “remind us why capitalism is the best economic system the world has ever seen.”

“A growing number of people have forgotten this fundamental truth,” she said. “The Democratic presidential candidates are embracing socialism, and some, in more traditional conservative circles, are calling for a more watered-down version of socialism.”

Both camps “are dangerous to the American people,” she said. “For the sake of our children and grandchildren, America’s future must be built on an actual capitalistic foundation.”

Haley also criticized socialist appeals to Scandinavian countries, saying those countries do not represent the real impact of socialism.

Haley discussed her childhood in South Carolina, where her parents started a small business that became successful due to the advantages of the American free-market system.

“This country has lifted up more people, unlocked more progress, and unleashed more prosperity than any other country in history,” she said. “This is America and the American system is capitalism.”

Dismissing those who view the term capitalism as politically incorrect, Haley argued that socialism has wrought destruction in every country it has been implemented.

“What good are our rights if our homes and savings can be taken?” she asked. “Are we really free if we own nothing and the government owns everything? Of course not.”

Capitalism has the power to cure diseases, lift a country out of poverty, and even fight the growing threat of climate change, Haley maintained.

“You wouldn’t know it from listening to the gloom and doom on the left, but the facts are clear: The world is getting cleaner, healthier, and wealthier. And the main reason is capitalism. Everywhere capitalism takes root, people do better,” Haley said. “We should celebrate this, not apologize for it.”