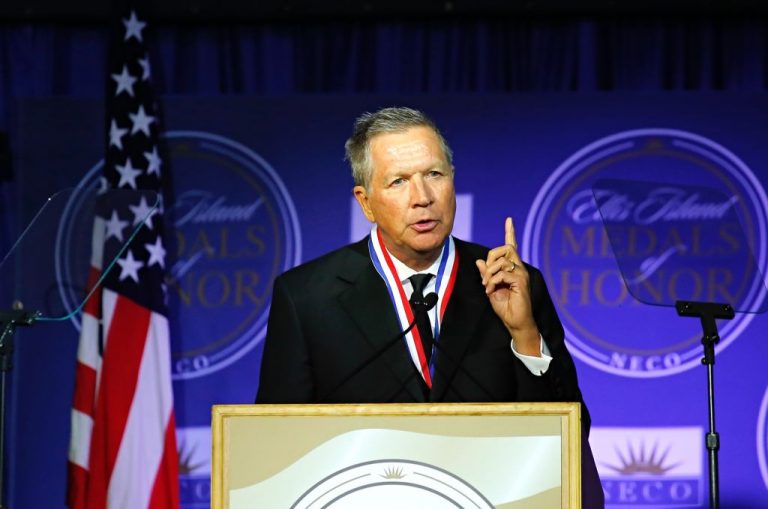 Former governor John Kasich (R., Ohio), a legendary a**hole even by modern political standards, said Friday that he has been pushed “across the Rubicon,” and now thinks President Donald Trump should be impeached.

“The issue of impeachment is really big to me,” Kasich said. “I say it with great sadness. This is not something that I really wanted to do.”

However, Kasich said, the president’s behavior with respect to Ukraine “cannot be tolerated.”

The former Republican presidential candidate, who was one of the many political opponents humiliated by Trump during the 2016 GOP primary, announced his impeachment swing during an interview with Ana Cabrera on CNN, where he is currently employed as a political commentator.

John Kasich tells Ana Cabrera that Trump should be impeached. “I say it with great sadness. This is not something that I really wanted to do. …But this behavior, in my opinion, cannot be tolerated.” pic.twitter.com/12YjAGPErM

The tales of Kasich’s epic douchebaggery are numerous. He once mimicked the shaking of Parkinson’s disease patients during a State of the State address. He called a police officer who gave him a traffic ticket an “idiot.” He berated flight attendants and refused to move from another passenger’s first-class seat after he was downgraded to make room for a traveling pilot.

“Just having interacted with him or interacted near him, I never met anyone so douchey and obnoxious and just dripping with disdain for people who in his mind aren’t as important as he is,” said comedian Julie Klausner, whose seat Kasich stole and refused to vacate.

Former governor Chris Christie (R., N.J.) isn’t a Kasich fan, either. In his 2019 memoir Let Me Finish, Christie recounted a baseball-themed conversation with Kasich that made him understand “why so many people in politics despise John Kasich.”

Kasich might be the most despised Republican not named Trump, or at least a close second behind Ted Cruz.

In other news...
US Lost Track of $715 Million in Weapons and Eq...
Sanders Takes Aim at Washington Post for Timing...
Hanau shooting: Suspect’s father is a Greens me...
Report: Failed Candidate Tired of Failing
Respondents to CNN Article About ‘Africanized B...
Supreme Court to Decide If Faith-Based Foster C...